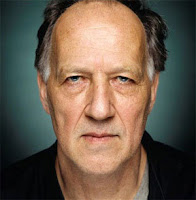 Christmas 1971. A plane full of people crashes into the Amazon Jungle. A massive search is started and the wreckage is found. Despite the best efforts of rescuers no one is found alive and the search is called off. 16 Days later Juliane Koepcke, aged 17 stumbles out of the jungle, the only survivor.

Leave it to Werner Herzog to talk Juliane to go back into the jungle and show us what it was like. Amazing, hypnotic film who's subject haunted Herzog for decades-he was in the airport at the time the plane took off when he was making Aguirre The Wrath of God. Clearly Herzog's obsession is our gain since this is a film that you fall into and watch in a state of wondrous disbelief. Tthe thought of what this young girl went through is mind blowing, even if you take into account that she was raised in the jungle at a scientific station. No matter how you slice it she was ten ways to Sunday lucky. Julianne tells us what happened in a weird detached manner of fact manner that is strangely inviting and yet eerily unemotional. As she says she has wall up that will keep her safe.

Its a wild film of an amazing story, a sibling of Herzog's Little Dieter Needs to Fly and Aguirre. I kept thinking that someone should turn it into a movie---and then Herzog shows clips from the movie that was made of the story complete with catty commentary by Juliane Koepcke who is standing in the jungle laughing at the silliness of it. I was very amused.

See this film. It will amaze you. Better it will entertain and inform you.
Posted by Steve Kopian at October 13, 2010