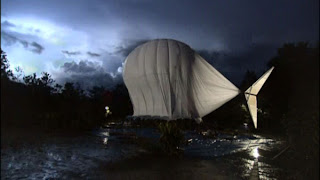 I am a huge Werner Herzog fan. His early films filled me with a wonderful sense of what movies could do and hooked me, at a young age, on the most powerful of all drugs, celluloid. The fact that I haven't yet talked about a film of Herzog's before this is damn near criminal, but no matter the time has arrived. I am about to begin a week of talk about the documentary films of Werner Herzog.

More than his fiction films, I am a fan of Herzog's documentaries. There is something about the way he sees a subject that opens your eyes to things other than the subject at hand. Often his documentaries are almost something else, his Lessons in the Darkness about the oil well fires in Kuwait is structured as an aliens arrival on earth. Its a haunting film that is more magical and informative than the similar IMAX film Fires of Kuwait. I'm currently working on weekend double feature that will talk about that film as well as Wild Blue Yonder, which is an interesting film about an alien on earth talking about a trip by people from our planet going to his. Its a head trip. However I'm getting ahead of myself. Before that happens I'd like to ease into the films of Werner Herzog by talking about White Diamond.

The White Diamond, is on the face of it the story of the building of an airship to study the canopy of the rain forests. It is also, as Werner Herzog tells it, the story of the search for absolution for the death of the inventors friend. I will certainly buy the first part, but I highly doubt the second.

This is simply one of the most beautiful films I've ever seen. The shots of the balloon in flight, the waterfall, the birds that live by the falls and the life in the canopy make this the first time I ever wanted to own the biggest and best TV ever made just so I could see these images. I doubt that other than on a rare occasion you'll ever have seen anything as beautiful.

Herzog also introduces us to some real characters Dr Dorrington, the inventor of the airship is a man of great passion. Mark Anthony Yhap, a man hired to help porter materials is probably worthy a film himself. Also the rest of the crew are also intriguing characters for the brief period they cross the screen. It is the mix of people and image that make this film work as well as it does.

(I'm about to talk about the flaws of the film which will sound a bit harsh, and it is, mostly because this is such a good film I'm kind of bothered that the film has any flaws)

The trouble is that the film almost doesn't work. As a narrative the film is sloppy and unfocused. Herzog, as great a director as he is, can often get lost in how he's telling a story, which sometimes seems he has clearer picture in his head rather than on the screen.

For example we are told about the cave behind the falls where the birds live and where no one has ever gone.We see a camera lowered down to a climber so footage inside the cave can be shot, only to be told we will not be shown the footage. Why? It makes no sense and it is a (very) minor frustration. It is only sometime later that we are told why, what is in the cave is a legend and to reveal whats there could up set the belief of the population. Its an odd way round the subject and feels completely backwards, which is both a Herzog strength and weakness (Here you wonder why tell us about the cave if you aren't going to show us, but then he explains it and in a weird way its okay).

And sometime Herzog gets lost in a story of his own making. Here Herzog hammers away at Dorrington about the death of a friend some years earlier when a ship he had made got caught up in the trees. Dorrington was in no way responsible for the accident or the death (other than he built the ship that was involved) but Herzog trumpets the point over and over in order to give some dramatic tension to what would otherwise be a pretty straight forward test flight of the airship. There is no reason for it and it adds a false note that almost sinks the film...from which it recovers from when ever we see the ship in flight or get away from the morbid subject.

And take flight it does...very much like the titled gem in the sky.

Flaws aside this is a stunning film that really should be seen on a big HD screen. It will knock your socks off and make you see the wonder of the world around us.

Definitely worth seeing. This film is out on DVD.
Posted by Steve Kopian at October 11, 2010