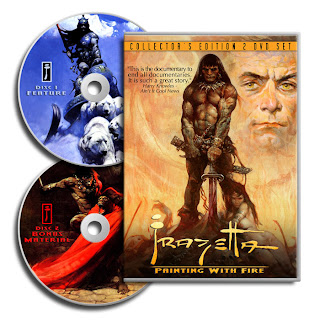 Frank Frazetta, who died this past May, was an incredibly talented artist who probably gained most of his notoriety from his paintings of Conan for paperback book covers in the 1960's and 1970's. He did many other fantasy bookcovers, paintings for movie posters, covers for horror magazines, comics, and even had an animated movie based on his art directed by Ralph Bakshi (Fire And Ice, which came out in 1983). But it is an interesting treat to see what artists have to say about Frazetta's art, and indeed hear what Frazetta has to say about the subject as well.

The documentary is a splicing of clips from interviews with contemporary fantasy and comic artists, along with a biography of Frazetta. Frazetta himself is one of the interview subjects, along with members of his family. Many of Frazetta's peers are interviewed as well, and there are also scenes of him wandering around Brooklyn reminiscing about the days of yore with some of them. We even follow him into his mother's home in Brooklyn.

A diverse range of people comprise the interview subjects, from actress Bo Derek, to musician Glenn Danzig, to the creator of The Rocketeer (and the man responsible for the late 20th Century revival of interest in 1950's pin-up model Bettie Page), Dave Stevens. Each relates their own personal way in which either the art, or the man, or both, affected their lives. It's an interesting testament to see how one man had such an effect on a broad range of talented human beings.

The Collector's Edition 2 DVD Set version that this review is based on comes with a large amount of bonus material on the second disc. There are many deleted scenes, outtakes, and additional stories to be told that were cut out of the actual feature to make it flow better. The first disc includes many extended interview segments as bonus material as well. But perhaps the most unique extra feature is at the beginning of the second disc, which shows Frazetta drawing a panther left-handed. After a series of strokes left him unable to draw right-handed, as he had naturally done all his life, he just taught himself how to do it with his other hand...a truly stunning achievement, especially when you consider he was in his 70's when he re-learned how to draw, and could still do it amazingly well.

Again, this review is based on the 2 disc version of Frazetta: Painting With Fire. There is a 2 disc Special Edition of the movie based on his art, Fire And Ice, which comes with the Painting With Fire main feature as the biggest bonus on the second disc...but then you don't get any of these great extras in this set. If the thought of a documentary of perhaps the greatest artist of the second half of the 20th Century seems interesting, you may as well go all out and get the version with all the goodies, and get Fire And Ice as a separate purchase.
Posted by Ken Fries at October 06, 2010