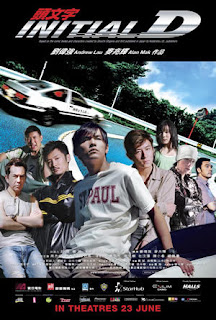 Takumi is a high schooler who often delivers his father's tofu late at night. His late night trips have made him adept at the winding downhill run of Mt. Akina, which is a course used by the street racers of the area as the ultimate test of skill. When an unintentional race brings him to the notice of the racers, his life changes as he has to field numerous offers to actually see who is the best driver.

Initial D is a live action Chinese film that's based on a Japanese manga (comic book and cartoon) that's broken box office records across Asia. Despite being a huge anime fan I've never seen the animation nor have I read the comic. I'm not sure if that's a good thing or a bad thing, but seeing how many fans of the source material are unhappy with the film I would say it's a good thing.

Flat out I liked this movie. It did take a while to warm up to, but once I began to take it for what it is I thoroughly enjoyed it.

Is it a great film? In someways yes, and in others, no. As I said this takes a bit to get going. The lead, Jay Chou (who is playing Kato in the new Green Hornet film), is a bit too close-mouthed for my taste, barely uttering a word for the entire two hours. It's a bit too teen-angsty. Still, you have great characters and great performances by pretty much everyone in the cast (even if everyone was speaking three or four different languages when this was filmed).

The racing is excellent. It mostly seems to have been done without CGI enhancement. I like that there are no horrific crashes, police chases, or other clichéd events that are so rampant in American movies. And while I was initially apprehensive by the fact that the racing is always on the same stretch of road, I eventually warmed to the idea, since by doing that we really got to see who was best. (If you want American style racing in many different environments stay away)

Definitely worth a look-see, especially if you want to see a race film that is not like all of the rest.
Posted by Steve Kopian at October 07, 2010