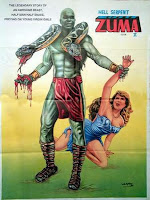 Today’s matinee review is a film called Zuma. It’s based on a Filipino comic book about an awakened snake god and his interactions with his daughter and other people. Zuma is very much the villain of the piece. I discovered the film through the book Mondo Macabro by Pete Tombs. It's about all of the weird and wild cinema that is off the radar of most English speaking or Western film fans. The book is a must read for anyone who wants to go off the beaten track of films. (If you do get the book you’ll need the websites in the side bar like Shocking Films, Video Search Of Miami, and Yes Asia, because they are the sort of places you’ll need to turn to in order to be able to find them) The book spawned a TV series on the films, as well as line of DVDs which has only a tiny fraction of titles listed.

I’m mixed about Zuma. There is a strong central story, and a great looking title character, but the film is a pure soap opera and goes on way too long. I’m so mixed on the film I’ve never tried to track down the sequel that was made. Regardless of my mixed feeling I do think that the film is worth searching out if you like the weird and the wacky. For a better explanation, the following is my IMDB review which I wrote up right after seeing it.

I was drawn in by the sight of the title character in pictures in the great book Mondo Macbro. He's a tall bald guy with a snake on either shoulder...or is it a two-headed snake wrapped around his shoulders? Sometimes I should just not be so curious.

The plot has some people discovering a buried pyramid. A group of them go in to explore. A woman in the group, off on her own, sees something get out of a crypt and leave the pyramid. When the group investigates they find nothing, only bodies outside. Soon after this Zuma, the guy from the crypt (the tall bald green guy with really big snakes on his shoulders), comes across a camping couple. He sets poisonous snakes on the man and then rapes and makes a slave of the woman. Bodies begin to pile up as the woman and Zuma, sporting a trench coat and a very large straw hat, begin to eat their way across the country side. Zuma is captured and the woman is thrown into prison. The military, not standing on ceremony, locks the green man in a cage and then fires several hundred rounds from a machine gun at him. When that doesn't work, they blast him with cannon fire and end up burying him in an avalanche. Where most movies would fade out at that point Zuma is only getting started; its only been 35 minutes and there are still 90 more to go.

Truly one of the wildest movies I've ever seen, this is a long movie that never seems to end. Zuma returns, there's a child, years pass, and we get to see one of the worst wigs in movie history. It's a dense, often talky movie that wears out its welcome after a short time. As I watched this I kept hoping that there would be a commercial or two to break up the monotony. I'm completely unfamiliar with the comic it's based upon, but I'm forced to wonder if it was really necessary to compress the entire run into 125 minutes.

Zuma has an interesting look. The snakes on his shoulders are clearly mechanical, however considering when and where it was done it's actually quite good.

Overall this is not something you really want to waste your time on. If you run across it take a pass. If you really must see Zuma in action then see if you can find the trailer on line or if you can talk your way into borrowing it from some sucker who owns a copy.
Posted by Steve Kopian at October 06, 2010