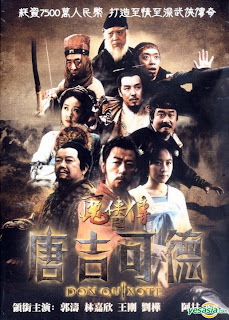 A wide ranging post covering a bunch of different subjects.

Yesterday I got an order from Yes Asia that contained, among other things, a film called Don Quixote. According to the Yes Asia web site (IMDB doesn't list the film yet) the film was made by Keifer Liu and stars Guo Tao as the Quixote character. Shot using 3D cameras the film looks spectacular. Dramatically the film is a bit of a mess with the script trying to shoe horn the events from the book into a Chinese setting. I'm not sure if all of the problems are in the script or in the subtitles which has the lead character Don Quixote though his name in Chinese is Tang Ji. To be perfectly honest I'm really mixed about the film with even the windmill sequence looking great but falling dramatically flat. A half an hour in I knew I wasn't going to write the film up for Unseen, however by the end I kind of felt I had to simply because it's an interesting adaption of a Western classic in an Eastern frame work. If you want to see what those in the East do with our classics give the film a shot.

Also yesterday Mondocurry atteneded the final Sabu screening at the Japan Society, Troubleman. It's the last half of a TV miniseries. he's promised to file a report which will go up when he manages to ge a minute.

The screenings are on sale for Film Comment Selects at Lincoln Center. I do have tickets for four films (I Saw the Devil, Burke and Hare, Insidious and Cold Fish) It's a good selection of films and I'm trying to add more.

I Saw the Devil is running a week later at BAM with the director in attendance as part of Severely Damaged: The Cinema of Kim Ji-woon. I've seen or have on DVD all of the directors films so it goes with out saying that I recommend the series. If you saw 2009's The Uninvited you will want to see the original version A Tale of Two Sisters which will mess you up in ways the remake could only dream to do. (Mondocurry talks about each of the films in the series the films on his blog and it can be found here.)

If you want to att

end the New York International Children's film Festival, you may want o order tickets sooner than later since they have sent out emails saying that some shows are getting close to selling out. Tickets can be had by clicking here.

Tuesday night is the next film in the Korean Cultural Service free screenings- Lifting King Kong. The screening starts at 7 with doors at 630. (At the Tribeca Cinemas) At the last one we were warned that the film is graphic in it depiction of injuries so if you have a queasy stomach don't go. Waiting to see what the weather is before I decide if I'm going.
Tomorrow night the Town Hall series is running Certifiably Jonathan. Its a docu-comedy about Jonathan Winters. Despite having a ticket I'm probably not going, it just doesn't look all that hot.
The New York Times takes a look at Foreign Language films that no one seems to be watching here.

Here is a good article on a documentary on the Toynbee Titles that played at Sundance.

The film Home which shows the earth from the air is currently playing in Manhattan for free. A very good interview with the director can be heard here.

thanks to Mondocurry for some of the links and details.
Posted by Steve Kopian at February 06, 2011