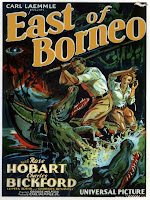 This is a really good adventure film that's probably all but forgotten.

The plot is simple. A woman travels into the jungle to find her husband, now a drunken court doctor for a jungle prince. He had left her years before because he thought she was having an affair. What happens when she gets there is the reason to watch.

I won't lie, the first part of this film is slow. Its the trip to the prince's city and other than the chanting of rowers and the sounds of the jungle this is almost silent. Its not terrible since the scenes of jungle wild life and the odd danger is interesting.

But its worth hanging on to the second half, since once the wife arrives its men being men as the prince and the doctor begin a strange game of chess for her. Its here that we get to see the good stuff, which I won't spoil other than to say crocodiles, tons of them. And this was in the day when you didn't fake it, they are there in quantity.

This is jungle thrills of the real variety since you don't know if some one is really going to be dinner.Had these scenes been done today the digital effects would have reduced the tension because you'd know it wasn't real, this is...WOW.

My sole complaint about the last 45 minutes has to do with how some scenes are shot. Today, thanks to better equipment and computers the camera can move more freely, here there are a couple of times I wish the camera moved so we could see some of the spectacle that ends this film better.

Definitely put this on your to see list. Its not perfect and it is dated but its really a good film that deserves to be seen.
Posted by Steve Kopian at February 21, 2011