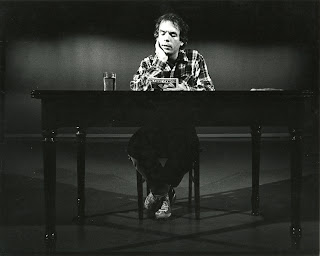 The life of Spaulding Gray in the words of Spaulding Gray. Assembled by Steven Soderbergh from hours of film and video tape the film covers Gray's life from birth until just before his death. Its a final monologue from a man who is best known for monologues.

The film is a funny, but almost overwhelmingly sad, look at the man and his life. Its a version of his life as he might have told right before he went into the great beyond. Its incomplete, details are missing (If you know his monologues you know how much is missing), but its still his life.

For me the biggest shock was seeing the change in the man after the accident in Ireland. He was clearly altered by the experience. He was no longer the same man who only months before had done the glorious and life affirming Morning Noon And Night. When I saw that Show at Lincoln Center I witnessed one of the most life affirming moments of my life. Little did anyone know that within mere months the man on stage celebrating life and family would be broken and set irrevocably (and seeing the footage unsurprisingly) toward self destruction.

I like the film. It seems to be a fitting, if overly dark, send off for a man who was always talking about himself. Being a fan I was deeply saddened by the film, at the loss. The Chumbawumba moment from Morning Noon and Night reduced me to tears. I freely admit it was because of what the moment means having seen the original show, its life. Unfortunately it comes right before Gray went into free fall. I kind of went into free fall too, I simply sat on the floor of my house (the film is on Sundance pay per view), not wrapping Christmas presents, just staring sadly at the TV screen.

This was the wrong movie to see during the happy time of Christmas...

That said, this is a really good film and worth seeing, especially if you loved the man and his work.

A personal aside. I met Gray during the run of Morning Noon and Night. He was giving a talk in connection with the show. When the talk was over I went up and spoke with him, asking him to sign my copy of his Slippery Slope. He seemed very nice, but seemed completely ill at ease with the notion of having fans and interacting with the public on anything other than his own terms.
Posted by Steve Kopian at February 02, 2011