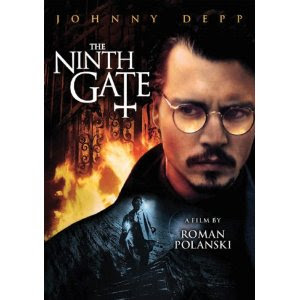 An extremely interesting film directed by Roman Polanski and starring Johnny Depp, this is an excellent example of roughly a half-dozen different genres. It covers the spectrum, as it could be considered a murder mystery, a thriller, a crime drama, an action flick, an adventure film, a horror movie, a romance...but definitely not a comedy. From the solemn tones of the opening credits, the somber mood is set in place, and an ominous feeling hangs over the film, and you, for the entire 2 hours and 13 minutes.

Based on the book The Club Dumas, the plot concerns Depp's character of rare book dealer Dean Corso tracking down copies of a book reputed to be able to conjure the devil. From the get-go, Depp's character is portrayed as a man with little to no morals, and much of the film concerns his transformation, however subtle, into something a little different. By no means is this a redemption film, however. Hardly any of the main characters would be considered likeable people if you were to meet them in real life. Corso is in the employ of Boris Balkan, played in a terrific understated sinister manner by Frank Langella. Half of Langella's performance in the film is in voice-over on the phone with the on-screen Depp, and that's when Langella actually delivers his creepiest moments.

There are several quitely played standout performances in this film, including Emmanuelle Seigner as the extremely mysterious Girl, who may be far more than she appears to be. The winner of the over-the-top award in this film would be Lena Olin for her performance as Liana Telfer, but it's what the character calls for, not a negative assessment of her acting. All of the characters weave themselves together quite nicely in a tight and efficient plot that fills every moment with something interesting and intriguing. The settings are also varied and beautiful, with locales ranging from New York to Paris to Madrid to Lisbon.

Remember all the hype that was given to The DaVinci Code a few years ago? All of the best ideas from that were done here seven years earlier, but just replace the pursuit of Christian objects with Satanic ones. It's a thrill ride thru Europe as Depp and Seigner continually encounter dangers of differing levels in pursuit of the 3 existing copies of The Nine Gates Of The Kingdom Of Shadows, and it slowly turns from a job into an obsession. The transformations, as well as most of the performances, are subtle, but compelling enough that it becomes very difficult to turn away. Depp's Corso finds himself being drawn into a world he's not quite sure he really wants to delve into, but after a while, he, and you, are willing to seek more.
Posted by Ken Fries at February 17, 2011