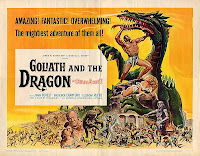 Mark Forest as Goliath in a more spectacular than usual sword and sandal production. The film co stars Broderick Crawford as the villain trying to take over Goliath's kingdom while he is out battling monsters (lots and lots of monsters) in order to complete a task for favored goddess.

The film and the plot are typical for the genre, however the film has a larger than normal number of supernatural creatures including gods, multi-headed dogs, winged monsters, and a dragon. The film also has some large scale action set pieces that make it clear they spent a couple of bucks on the film. (even if you can frequently see the wires and zippers)

In no way serious or deep, its the sort of mindless spectacle that you can let wash over you on a Sunday afternoon. I've seen most of the films in the swords and sandal cycle and this is one of the most enjoyable and best made.

Worth a look-especially if you can get one of the great looking letterboxed editions floating around. (Check Sinister Cinema or Something Weird)
Posted by Steve Kopian at February 03, 2011