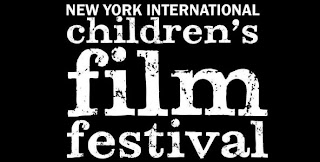 The New York Children's Film Festival starts next Friday with a screening of Mars Need Moms at the Director's guild. I wouldn't bother going since it opens a week or so later, but it's the opening night film so I'm going, Opening Night screenings are a blast.

I should warn you that the tickets for many films are already scarce (Opening Night Tickets are gone) and that even the added screenings (say of A Cat in Paris) have sold out.

If you're looking for things to see I just wanted to say that there are a few gems.

Echoes of the Rainbow which I saw last year at the New York Asian Film Festival isn't bad. I didn't love it, but the film has thrilled (ie. become one of their all time favorites) the many people in my office who I loaned the import DVD. Its the memory tale of a young boy about growing up in Hong Kong in the early 1960's. Actor Simon Yam won numerous awards for his portrayal of the boys father.

Time of Eden is an animated film that was screened in part last year. Its a love story between a human and a robot.. I loved what I saw and I had to see the rest.

Mia and Magoo is one of the most beautiful animated films you're likely to see. This is the premiere of the English language version. Hopefully the voices will do the original French voices justice. As it is it's a wonderful film about a young girl trying to find her dad. How good is it, I've seen it about6 times in the last year.

I just recently got to see Sammy's Adventures: The Secret Passage. The festival is showing it in 3D however I saw it in 2D. It should look great in 3D with the characters swimming out over the audience. The film itself seems more geared toward little kids than the big ones. Its about Sammy trying to find a passage that will allow him to travel around the world. It's set up to provide some great 3D thrills in set marvelous pieces while bludgeoning the audience with an obvious environmental message. I wasn't thrilled with the story, but then again I'm not the intended audience which is the under 10 set. Visually the film does impress at times, and as I said I can only imagine how great this will look in 3D. If you have young ones give it a shot. (For those who should care this is by the same director as Fly Me to the Moon, which was about flies that travel into space on an Apollo mission. It's better on the whole than that film- but much more simplistic)
Posted by Steve Kopian at February 25, 2011