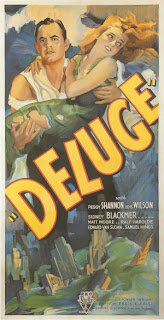 This is the film that all of that great footage of the destruction of New York City by tidal wave that you see in any number of B-films from the 1930’s 40’s and 50’s comes from. You know the footage of huge waves driving ships into the buildings of Manhattan. (you can see it here). The full film was believed to have been lost for decades however in the 90’s a print showed up in Italy dubbed into Italian. The footage was subtitled and the film is floating out on VHS and on the collector DVD market.

Ever since the film showed up again I was torn about seeing it. I wanted to see the film because I wanted to see the source from some really great destruction footage, on the other hand I was being told by anyone who saw it that it was a completely awful movie. For some reason I decided to bite the bullet and pick it up.

Surprise this is actually a pretty good movie, certainly it’s more realistic in many way than the many of the modern day films.

The plot has cataclysmic destruction happening across the globe for some unknown reason. People are aware bad things are happening but no one knows why nor can they do anything about it. The first twenty minutes of the film concern the increasing destruction ending with pretty much everything laid waste. After that the film tells the split story of a family broken apart, a father split off from his wife and children; it also tells the story of a swimmer who is taken in by a brutish man who wants her for his own. She escapes and meets the father who is living in a cave. The man is unaware that his wife and children are safe and living in a town that is trying to rebuild itself. How all of the elements come together is the story.

To be certain it’s a melodrama but at the same time its rather adult with people living in sin, implications of rape, murder and other nastiness. It also has one of the most haunting and enigmatic endings I’ve seen in quite awhile. What exactly it means isn’t clear (death or ?)

I like that people are a mix of civilized and beasts. I like how in the wake of the destruction the town reverts to a kind of tribalism-you will be our leader because you are the strongest- and how once the principles of democracy are pointed out they decide to act more civilized and take a vote.
I like that everyone is wounded mentally if not physically. No one is unscathed by what happens. The swimmer has had too many nasty things happen to her and when she finds a good man she wants to hang on to him. He in turn is split between women. No one knows what the right thing is to do.

Best of all the destruction is constantly in evidence. It looks like the town has been wrecked and it stays like that all through the movie. Everyone has to move through the debris. People are haggling over treasures. This is a world in chaos.

It’s also doesn’t end happy. Sure it’s a kind of pseudo-happy ending but there is a cost for everyone. Also we don’t know what the future will hold for anyone. Is the cataclysm over? We don’t know? And its clear from the events that there are some really bad people out there, how will it all turn out in the end, who can say.

It feels like the first part of a story. You want to know what next…

This is a solid piece of film making. Not only is it a great drama but it leaves you uneasy and thinking about what would happen if this actually happened. Certainly I never had those thoughts after Day After Tomorrow or Volcano or any of the other modern disaster films.

The fact that this film got lost amazes me. Its simply too good a movie to think that it would have gotten lost. On the other hand the opening sequences are rather intense and the out look is rather bleak. Perhaps the film's darkness is whats to blame. Whatever the reason this is a film that probably got lost on purpose. (As it is the surviving print is ten minutes shorter than the full 1933 running time)

Definitely worth a look. Anyone who loves movies, and their history really should try and find themselves a copy.

(Someone on IMDB has said that another print has surfaced in France- this time in French. One can hope that if true its a fuller print of the film)
Posted by Steve Kopian at February 16, 2011