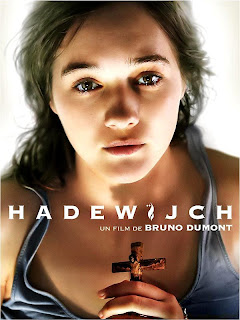 This was on my short of films to see at the 2009 New York Film Festival but scheduling and a wariness concerning the subject matter made me have to wait until the film surfaced in December as an IFC Films release in theaters and on their pay per view service.


The film, concerning a burning desire to connect with God, may sound like an odd choice for films with a romantic bend, but if you watch the film you'll see that what our heroine feels is very much like a woman yearning for her lover.

The title is the name given to our heroine by the nuns in the convent she is seeking to join. The name is a reference to a 13th century poet. The women in the convent are bewildered by the young girl who refuses to eat, refuses to wear a coat in bad weather, and takes great pains in any attempt to mortify her body. Unsure of how to handle her they ask her to leave, so she returns to her well to do family.

She then goes about her life until the day she meets a nice young man who just happens to be a Muslim. What happens next is partly what you expect and partly not. Mostly its an examination of one's path to God, especially when that God isn't talking.

Actually the film is a meditative examination of how the heart approaches what it yearns, only this time its a connection with God.

A beautiful and beautifully acted film this is a very deliberate meditation on belief. It can be argued that its so deliberate as to be slow, and in all honesty it is. This is a film that is going to take its time in getting where its going.

Its also a film that is going to confound your expectations. Little in the film goes the way you expect it. Our heroine is not your typical person with religious fervor. The Muslim's she meets are not you typical movie Muslims. What happens is not what you think will happen. Its the sort of film that you have to see a second time, not only because its good, but also because odds are you've fought it for a good portion of it so that when you get to the end and it's all played out, you realize that you haven't gotten all you could out of the film simply because you worked hard against it happening.

You're going to need to see this a second a time. I know I do.

Beyond that I don't know what else to say. This is the sort of film that is better to see before reading about since anything I'm going to say is not going to do the film justice.

The best thing I can say is see this if you want an emotional and heady discussion of fervor see this film.
Posted by Steve Kopian at February 15, 2011