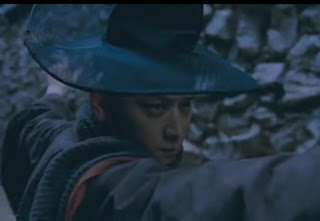 A wonderful ride of a film that is the sort of thing that starts and grabs hold of you and drags you along whether you want to go. Actually you do want to go because the trip is putting a huge stupid ass grin on your face and you're wondering whats going to happen next.

The simple version of the story has goblins being released when three Taoist gods let them out a day early. Losing the flute that will keep them in check, the gods are forced to use a wizard to recover it. Into the mix comes Woochi, a young man who fancies himself a wizard, but is in reality just a wizard in training. Through circumstances Woochi is believed to have killed his master and is locked into a painting-eventually (now several hundred years later) to be brought out of it by the Taoist gods who need his help.

It has action and humor and magic and twists and a keen sense of fun. As I said to a friend of mine- it ain't perfect but its just a blast. I had a great time and when I was watching the import DVD I found myself staying up until way way past my bed time to see how it came out.

One of the things that I like is how the film turns little flaws into pluses. The CGI monsters are used in such away that give the film a unique style. The wire work which often is wild and fluid is nicely done and feels right for the film even though it might not have worked else where, its very much stylistic.

If the film has any real flaw it's that the film is probably too long at 135 minutes. Somewhere in the final last half hour the film seems to be stretching things which is not how it was for the proceeding almost two hours.

I loved this film a great deal. It was the first film that I saw in 2011 that I think has a shot at being on the my end of year favorite list.
Posted by Steve Kopian at February 11, 2011