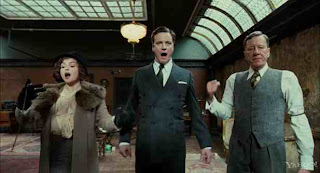 DB here. I've been rough on the Oscar nominees for this year. Last week I took a number of them to task for not quite being up to snuff. That attitude is about to change. Tonight I'm presenting a few kind words about what I think is the best of the eight Oscar Nominees for Best Picture that I've seen. How good do I think it is, well basically I've seen it five times over the same number of days.

My good friend Reg has been waxing poetic about the film for sometime and to that end I asked him to write it up. He came across it and fell in love with it first so he got first shot at writing it up. What he's given us is a review that is both loving and wonderfully kidding. I find this a perfect mix for a film that has become the front runner for the Oscar and in the sites of those wishing to knock a damn great film.

And with out further adieu I give you the words of Unseen Film resident International Man of Danger with his thoughts on The King's Speech.

Warning: Contains Spoilers. If you do not wish to know the outcome of the 1930s in Britain, do not read any further.

So a guy walks into a speech therapist's office and says "...."
And the speech therapist says "That's alright. I'm not a doctor"
And then Neville Chjamberlain says "But we still need the eggs."
And Churchill says "Ohhh yesss!!"

I'll start out with four words about this fillum: Colin Firth=Oscar-bait.

I understand that he might be given a run for his money by James Franco in Danny Boyle's classy reinvention of the Saw franchise, (and I bet that's a phrase you never thought you'd read, Unseenerati,) but look at the stats. How many acting Oscars in recent years have been won by people playing either members of the British Royal family or struggling with a physical or mental disability? I think you'll find the answer is "Most".

But Firth's performance in this fillum deserves to be lauded. To focus on his ability to stammer would be like focussing on the bass line of a Jim Steinman song and ignoring the rest. His Bertie is a complex human being rathr than a study in mannerisms. The snobbery and arrogance he exhibits at the beginning are pitch-perfect reflections of the performance of Michael Gambon as the martinet George V later in the fillum and the warmth he exudes in the scenes with the young princesses show a man determined to be a better father to his children than his father was to him. Yes, the film is about his trying to deal with his stammer, (the hint is in the title,) but Firth never allows the character to be defined by his impediment. His Bertie is much more than just the stutter.

And so to Geoffrey Rush. Rush is a brilliant actor, but when asked to play an eccentric character he can occasionally go a little over the top. In the same way that Julian Clary can occassionally go a little bit camp. Or Brian Blessed can occasionally be a little bit LOUD. (Apologies for that Unseenerati, but the site's style guide says that any reference to Brian Blessed must include at least one word in caps.)

Thankfully, in this fillum he is magnificently restrained. His Leonard Logue is gently eccentric without ever being manic. Warmth is a word I think I'll be coming back to and Rush brings it in bucket-loads without ever threatening to become maudlin as some lesser actors might, (not mentioning any names, you know who you are Robin.) when playing an unconventional character like this.

But it belittles this fillum just to focus on the performanes of the lead actors, because I think even Paully Shore would not be completely dire in a fillum this well written.

In the lead-up to writing this review, I mentioned to the guvnor, Mr Bourroughs, English film critic Mark Kermode's observation (and if you aren't listening to Kermode and Mayo's film review on BBC radio why not?), that it takes a particular kind of brilliance to write a script where the feel-good ending is the announcement of the beginning of World War II. (I did warn you there'd be spoilers.)

One of the things I really admired about this film was the brilliant writing, in particular, the use of foreshadowing. Two examples that stood out for me were Rush's audition piece for an amateur drama production with the opening speech from Richard III, ( I won't say any more about that because I know the guvnor is going to watch this fillum again and I want him to admire the subtlety; suffice it to say it's the best use of an out of context Shakespeare quote I've ever come across.) and the early scene where Bertie is encouraged by one of his speech therapists to take up smoking "to relax the larynx". I don't want to spoil any potential sequel, but that is a big plot coupon.

And the thing that doesn't get mentioned about this fillum is that it is very funny. Serial mentalist Helena Bonham Carter, in probably her most restrained performance since A Room With A View, demonstrates a hitherto unseen talent for deadpan comedy.

I could wax on. A fillum where an appearance by Derek Jacobi, (or is it Judi Dench, well have you seen them in the same room together?) feels like they're over-egging the pudding

This is one to take home on DVD.

How can I put it? I have a friend who is one of the most gorgeous women I have ever seen. She is also incredibly talented and quite successful. She is the kind of person you just want to resent. But she is also incredibly caring and generous and she makes everyone around her feel better.

The King's Speech is the cinematic equivalent of my friend.

About the worst thing I can say about it is that after seeing it, it may take a viewing of The Green Hornet to bring you back down to earth.
Posted by Steve Kopian at February 01, 2011