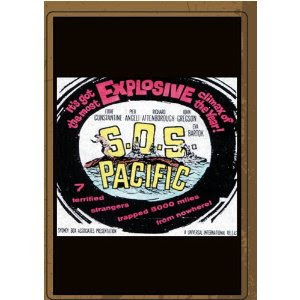 A plane full of people encounters trouble in flight and is forced down in the Pacific. Thankfully they are near an island or not, since the island is due to have an atom bomb test go off in a very short time and they have no way of letting anyone know that they are there.

It may sound corny and contrived but this film just works from start to finish. Once the film is underway you just are happy to have a film this involving to drag you along for the 90 minutes that this film takes to get to the conclusion. Why this film isn't better known is mystery since it has everything that a mystery should in spades and then some.

The cast is great, including Richard Attenborough who plays one of the screens great slime balls.
Eddie Constantine makes great hero and makes you wonder why he never became a bigger star here in the United States.

Constantine is probably best known for a series of films where he played detective Lemmy Caution. These were huge hits in Europe but remained purely cult material in the US. The Caution character was taken by Jean-Luc Godard who used him to send up the detective genre and science fiction films in Alphaville. The real footnote for this film is that it's probably the only time that Constantine's own voice can be heard speaking in English (all his other films he was dubbed)

Search this film out (I think Amazon is selling Sinister Cinema's version,) you will enjoy it.
Posted by Steve Kopian at February 25, 2011