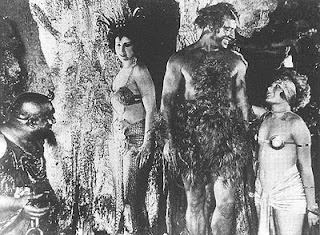 What a great looking movie.

Several demons come to earth to begin plans for taking over the world. Standing in their way is Maciste a super strong good guy. The demons offer Maciste anything he wants if he will aid them however he turns them down. They eventually trick Maciste so that he ends up in hell where he proceeds to mop up the place.

If you've ever seen any of the sword and sandal films from the 1950's and 1960's with Maciste you're looking at the same character. Created in the 1913 film Cabria the do gooding muscle man has been helping the down trodden ever since. Not dressed as a muscle man, but instead as a country gentleman, Maciste's appearance may throw some people off, but rest assured its the same guy.

I love this movie. Its a great deal of fun. It looks great with demons,dragons and a giant that put most other film makers to shame (at least until the advent of computer graphics). This is an epic with thousands of demons and huge sets and great action and everything about a movie that makes you go WOW. There is a wonderful moral sense to the film that we no longer have and which adds a nice dimension to the film.

It also doesn't go in the direction you think it will which is great for those who think they've seen it all.

Silent or no, this is one of the best muscle man movies there is (trust me I've seen most of them) and is worth searching out. Even better its a damn fine movie in its own right.

See this movie or I'll send the flying demons after you.
Posted by Steve Kopian at February 02, 2011

Email ThisBlogThis!Share to TwitterShare to FacebookShare to Pinterest
Labels: swords and sandals