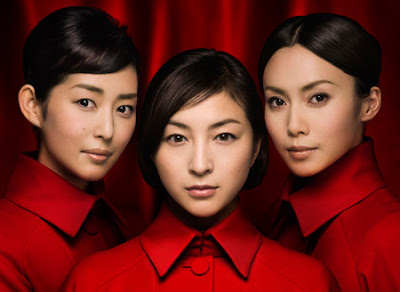 I was suppose to see this as the last film of my run at the 2010 NYAFF and Japan Cuts but it was the sole Friday film after a solid two plus weeks of films every day so I bailed. I finally caught up with it as an import DVD and realized that if I had any hope of truly enjoying the film it wasn't going to be at the end of a long run of films at a theater I would have had to struggle to get to on time.

Set in 1957 the the film is the story of a young woman who meets the man of her dreams. He is a decade older than her, but there is something about him, perhaps the fact that he is so enigmatic, that she falls head over heels. After returning from their honeymoon he leaves on a business trip, planning on being home in a week. However on the night of his planned return she is left sitting home alone with a finely prepared meal all alone.


After waiting and not getting any answers from anyone she takes it upon herself to head off to where her husband was last seen. Arriving not long after a body was found she is relieved to see it isn't her husband. She then begins to investigate her husbands connections and finds herself connecting with the wife of a manufacturer her husband dealt with, and who some say he had a close relationship.

I don't want to tell you the entire plot, but I will say bodies begin to pile up and things are not as they appear.


The simple description of this film is imagine if Hitchcock was making movies in Japan in the 1960's. Yes I know the film was made in 2010, but the film has the feel and the style of what Hitchcock was doing in the late 50's and early 60's on either side of Psycho. Its a mystery that is looking not only at the central missing person story but is also looking at the society in which the story takes place.

The film looks to have come from say MGM in 1950's. The look of the film, the choice of shots, of music all make you think that this was ripped from the studio back lot.

While the film is most certainly a rippingly good mystery its the world that the film operates in, and comments on that is of interest. As the film starts the war has been over for over ten years. Japan has been slowly coming back to life and indeed Japan is starting to become a financial power. For many what went before is to be tossed aside, its the new that matters. There is a battle between the old japan and what is considered the New Japan raging in society and with in people.

By telling you that I may have given away a little too much to the mystery, but at the same time, it helps to know what was going on in Japan at the time the story takes place. There are some plot points and clues that I missed the first time through simply because I didn't completely understand the history. Don't let me scare you by saying that, you'll be able to follow everything that happens, it just that you won't get the full ramifications until you get to the end and you look back. I'm guessing that this film hasn't found a US distributor since they think the film is too Japanese.

When I first saw this film I didn't think I was going to write this film up for Unseen. I thought it was a good film that was going to bet a passing mention but not a full review. And then over the next few days I found I was telling everyone about the film. Clearly if I was talking about the film I needed to write it up.

This is one to search out. Not currently available in the US it can be found as an import. If you're interested about this you can take a look at Jpdorama who has it at an affordable price. (One word of advise make sure you check the subtitles since many of their DVDs don't have English)
Posted by Steve Kopian at February 23, 2011