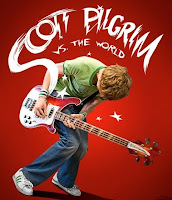 Michael Cera is twentysomething guy who refuses to grow up. He's dating a high school junior, who appears to be his perfect match. Things are fine until he sees the pink-haired Ramona Flowers and he makes his move to win her heart. Unfortunately she has ex-boyfriends and in order to win the maiden he must beat all of her exes in battles to the death.
One of the best reviewed films of the year, this is a film that did almost no business at the box office. It was a failure that confused everyone who loved the film. This was after all a hip and happening film in touch with the young audience and with comic people and it bombed. No one could understand it.

On the other hand anyone I know who saw the film, myself included, could completely understand how the movie could bomb since the movie isn't very good.
Even before I saw the film I kind of suspected that the film was not as advertised. The problem was how every review was describing it, comic book like, in touch with today's sensibilities, a portent to the future of films. They were big words and high praise of the sort that set the film up to an almost impossibly high level.
What went wrong?
First off the Scott Pilgrim character is a bit creepy. As a guy who dated a high school girl when I was in my early twenties I can attest to the fact that those sort of relationships can come off as just plain weird or icky. (It's only many years on did the young lady's mother admit to liking me) There is something about Pilgrim that kind of pushes him into the weird category, since he really is a kid who won't grow up, and wants to take great pains to assure that will never happen. This brings me to my next point ...
What complicates things is that there seems to be something wrong with all of the characters. To me what wrong is that even though they are played by people who are of the right age or approximately the right age, they all have the feeling of being too old for their characters. Watching them I had the feeling I get when I watch bad films from the 1950's and 60's where 30-year-olds with the beginnings of crows feet played teenagers. The characters are not real people they are some one's idea of what people in their late teens or early twenties are like. These are representations of an idea, they aren't real on any level.
Having read some of the comic, the characters work in that context, they are real in terms of the comic so that you don't question what they are doing; most importantly the Pilgrim character isn't the wrong sort of creepy.
When you get past the characters the real trouble with the film is that it's constructed to be arch and mannered and so deliberate that they have the life sucked out of it. It confuses flash for substance. Why simply do something when you can spice it up with neon colors, text over the image or overdone sound effects? Yes, this is based on a comic book but its as if the directors only reference for adapting a comic book was the old Batman TV show. They seem to have forgotten that films are not comic books and the Batman TV show isn't a comic book.
The trick when you make a film, as when you create any world, you have to make something that feels real. The world has to be real even if it's only on the screen. It has to be real with in it's own terms. Scott Pilgrim unfortunately never creates a real world. One of the reasons the film fails to do this is that it takes these characters and situations that are pure comic book (send up) and drops them into a real world. if you look past the characters the world Scott Pilgrim takes place in is the real world. There is no silliness and nothing over the top in the world the characters wanders through, which makes the over the top antics even more awkward.
Sitting in the theater watching the film I was bewildered by the messiness of it all. I was even more bewildered by the fact that so many critics fell over themselves praising the film. It's as if they were reviewing the idea of the film rather than what was actually on screen.
The film is merely okay and not one of the best of the year.
Posted by Steve Kopian at February 09, 2011