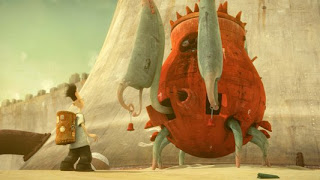 A wonderful little film that is little only in the sense that it's 15 minutes long. It actually manages to pack much more into that time frame than many pictures 6 times in length. A young boy finds a lost thing that doesn't quite belong in our world, and sets about trying to put it back where it DOES belong. Unfortunately, everyone around seems to be too busy in their own little worlds to recognize the situation. It makes a nice statement about how we as humans can fall too easily into the trap of getting set in our ways, and becoming too involved in the routine that is our day-to-day existence. The Lost Thing in question is a brightly colored...thing...that is in stark contrast to much of the gray and drab surroundings of the world the boy inhabits...which is ours, sadly.

In addition to packing a statement, the film also does not disappoint visually. A computer-animated film, it just won the Academy Award for Best Animated Short Film, and you can see why. It is a beautiful artistic achievement, with a quirky style to the human figures, but an amazing level of detail put into the settings, people, buildings, and...things. There isn't anything harried about any of the characters in the film, they just move along at their pace, and it's perfect for the tone of the film. The colors, and some of the unique aspects of visual storytelling utilized (in particular, a multiple "panel" shot towards the end depicting a journey) make this a compelling watch from beginning to end.

The story is based on a book by Shaun Tan, who also co-directed the film. The narration, told from the perspective of the boy, is done by Tim Minchin, who has been reviewed more than once here at Unseen for his own musical comedic stylings. It was actually due to his involvement that we here at Unseen first became of this film. Thankfully, Minchin seems to always be attached to quality projects, and this is definitely one of them. While it is available on DVD from Australia, it would probably be easier to just get it from iTunes, and it is definitely well worth far more than the small price.
Posted by Ken Fries at February 28, 2011