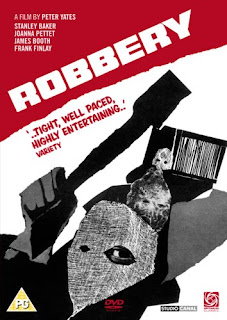 Last night the Film Society of Lincoln Center screened Peter Yates' Robbery. The film was made a year before Yates did Bullitt, the film's high tension documentary style helped Yates get the job across the Atlantic.

The film tells the story of a group of men, lead by Stanley Baker, who put together a plan to rob a mail train over over bank holiday. The film begins with a preliminary heist of some sort. What exactly is going on isn't apparent but it's done so cleverly that you're sucked in, From there we're off and running as Baker tells his men what he's got in mind for them next.

Based in part on the Great Train Robbery several years earlier and told in a documentary style that is rarely used any more, this is very much a you are there affair. We are in the trenches with these guys in away that makes us a near participant (I wonder what our cut is going to be?). If there is any flaw with the documentary style it's that the use of actors like Baker, Frank Finley or any of the recognizable British character actors that fill out the cast, is simply in that their faces are recognizable. Had this been a cast of nobodies this really would have been real.
Actually one of the really neat things about the documentary style used is that this film was shot in real locations. The streets, the houses, the trains all feel real. These are real places. They all feel lived in. This is a fantastic portrait of the real England at the time this was made. In other words this isn't the splashy showy Mod of the big budget movies and the fashion pages but back alleys, dirty warehouses and garages. If you love films that are set in real places you need to see this.
The film is full of several great set pieces that make you sit up and take notice. From the opening robbery, told from up on high, to the resulting car chase, the train robbery itself and the resulting complications, it's just one great sequence after another. One can see how Yates graduated from this to his next film.

I don't know why this film doesn't have a better reputation when it's clear that the film was responsible for later caper films like The Anderson Tapes, The French Connection or even Bullitt.
This is a film that is definitely worth tracking down....
...which if you're in New York City next Wednesday you can do when the film screens for a second time at 1PM...
... or you can do like I did and pick up the DVD as an import from Amazon UK. Just keep in mind that its region coded and PAL. (I would have loved to have seen this on a big screen except that the screenings were not convenient for me, which is why I sat at home and watched it with my dad.)
Posted by Steve Kopian at February 24, 2011