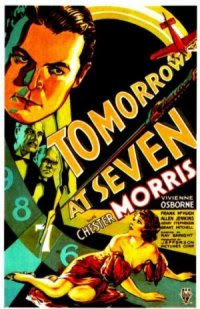 A killer known as the Black Ace is on the loose. The Ace leaves a calling card with the time of his victims death on it. The Ace has killed several prominent people and a rich friend of some of the victims, Winters, is looking to put a stop to it. Chester Morris plays a mystery writer putting together a book on the killer. He meets the daughter of Winters on a train on his way to offer what he knows in the hunt for the killer. Not long after that Winters receives a death threat and while in the middle of an air plane flight the flights flicker for a moment and he is killed.

This is an okay film that is ruined by two bumbling cops Dugan and Clancy who push a witty and clever mystery into the realm of silly. Normally I like the work of Frank McHugh and Allen Jenkins but here they just come off as being bumbling fools. Its awful, or rather not funny. They take the desire to know more out of the mystery and the laughs out of the comedy. There is no real reason for them to exist except to kill time.If you can divorce them from the rest of the movie this is a good little mystery, something not easy to do.

Worth seeing if you run across it. Not sure its a rental but on late night TV its worth trying
Posted by Steve Kopian at November 18, 2011