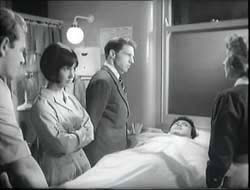 Are you Disappointed that civilization such as ours can still produce destructive people. You're right we are ashamed.

British science fiction tale written by Robert Holmes, who many of you who are long time fans of Dr Who know as a writer and script editor of that show. He was the creator of the Autons and the Sontarans and others. Elements of this film was reused in the Dr Who story Spearhead From Space.

The film begins with a mysterious fog in the the woods. A couple, a man and his mistress run into a strange man who wanders in to road and in front of their car. Panicked he drops his mistress off before taking the strange man to the hospital. As the doctors try to deduce where the man came from (it's clear from the tests they are doing he's not from these here parts),the military investigates what they believe is the landing of a space ship of some sort.

My mentioning of this film coming from one of the writers of Dr Who isn't unintentional, it's very apropos since the film plays like an episode of Who or some similar TV show but aimed at the big screen (we see a nudie book cover at the start and there is some blood). Its a solid little story, even if it has echoes of stories that came before and since. One of the things that I like is that other than a couple of scenes with spaceships, almost everything science fictiony is implied. This isn't a gadget filled film rather it's a film full of characters and ideas.

to be certain it's not the best film ever made, or even the best film of its type, however it's an enjoyable like way to fill 80 minutes on a rainy Sunday afternoon.
Posted by Steve Kopian at November 13, 2011