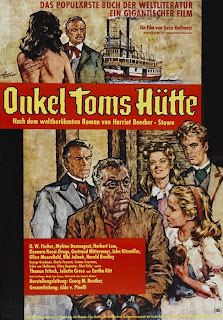 Before we move on to a weekend pair of god awful Godfrey Ho films that finish out the Thanksgiving marathon of films to avoid we take a look at a German version of a classic of American Literature- Uncle Tom's Cabin.

You know you're doomed from the opening credits. Sometimes there is no hope even from the first frame.

Take for example today's film which begins with pictures of what appear to be slaves going through a swamp. This leads to a plantation house burning and more slaves. Finally there are some shots of a river boat at dusk. Over these images are titles read exactly as follows (with several seconds between each line:

The Book Abraham Lincoln credited with starting the Civil War

of slavery in the Deep South

We then get a credits role which put outs the names and roles of everyone associated with this major WTF production as we get "Let My People Go" sung by a bunch of slaves.

From there we get a pale version of the novel as we get a great villain in Simon Legree and more or less cardboard cut outs of everyone else. Events whiz by for maximum sleaze (though IMDB says this film got a G rating). We even get a bar room fight and siege of a monastery that looks like they were lifted from a bad spaghetti western.

If the fate of the slaves hinged on this film we'd still have slavery.

I'm forced to ask what were they thinking?

Okay, I saw this dubbed into English, I did not see this in the original German (not that I'd want to) but I can't really imagine line readings that could make the film more over the top and border line offensive. It's so badly dubbed that whats supposed to be tears during the death of little Eva sounds like ruckus laughter.

Who made this film?

This film is a mind blower.

All I kept thinking as I watched this What the hell were they thinking?

I completely understand that the film is a product of the time it was made in and the place it was made (Americans have a very uneasy relationship with the book and have been loathed to adapt it since the silent days so it figures it was made in Europe) but there had to be a better way then this. I mean is it wrong to expect a film to be not laughable, inoffensive, marginally well made?

I guess it is.

On the other hand to me the source novel was always problematic. It never struck me as very good. To my eyes, back when I read it many many years ago, it seemed to be of interest purely historically for what it inspired rather than for how well it was or wasn't written. It was a historical object and not a work of art. I suppose on some level I shouldn't have expect high art (or even low art) from such a book.

As you can see I really didn't like the film. Outside of a wonderfully evil portrayal by Herbert Lom as Simon Legree, there is nothing to recommend from this film except the wrong sort of laughter and pain at how bad it is.

I know this film has a 5.8 at IMDB but there is no way that can be right. No way.