The Ninth Configuration: The Commentary 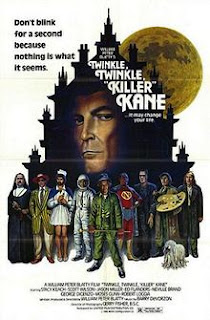 William Peter Blatty who wrote and directed The Ninth Configuration makes a comment directed at Leonard Maltin and other film encyclopedias who say that the only official running time for this film is the 118 minute one now on DVD saying that every cut of the film that was made by Blatty himself...They are all his cut. I mention this at the outset since the story of Colonel Kane and the men he is charged with healing was a story that Blatty has wrestled with for many years. It began with a novel, which he partially rewrote. It went through a couple of name changes (Ninth Configuration to Twinkle Twinkle Killer Kane and back again.) and finally as a film he cut and recut until he could get it right. There is also a stage version which was finally produced in California in 2010

The film, book and play concern a brilliant psychiatrist named Hudson Kane. He's called into assess and treat a bunch of soldiers who were all top of their game and who suddenly went mad. The military have secreted them away into a castle in the Pacific North West with the intention of trying to find a cure. A major problem becomes clear when everyone realizes that Kane is probably as crazy as everyone else.

This is one of my favorite films of all time. Filled with endlessly quotable dialog and sense that anything can happen (Blatty wasn't a film director so he tells the story in ways that a conventional director would never do (for example the voice overs) and the film is infinitely better for it. There is a massive sense of a brain behind it all and it is one of the most intelligent films ever to come out of Hollywood. Think about it when was the last time you saw a real reasoned discussion of god and existence from Hollywood?

I've taken much of this film to heart and have used it as one of the guides in my life.

Blatty's commentary deepens the understanding of the film. It's a talk that explains not only how the film was made, but what he was getting at, which is something that deepens what is on screen.

The commentary also clarifies the end of the film. There are in fact two endings of the film. Well one but there is two ways as to how we get there, Its a question of where some injuries occur. There is a preferred way, which frankly I'm opposed to. For me the ending Blatty prefers doesn't work in that is kind of negates the previous bar fight sequence (which is where the injury should happen). I prefer the one that Blatty hates because, in context of the film as it exists, it makes more sense.(If Blatty wants to add in one more scene that leads to that he can, but until then it doesn't work)

Yes, I know that was vague but if you haven't seen the film then I want you to be affected by the ending. (And despite recent talk that knowing spoilers doesn't effect enjoyment I've been told by a couple of people they wished they hadn't known how this ends so that's why I'm being vague)

I love this film a great deal and I think the commentary adds a great deal to the film. (Though to be honest about a half an hour to the end it does run out of steam until we get to the ending).

Currently out on DVD this should be easy to find.
Posted by Steve Kopian at November 29, 2011