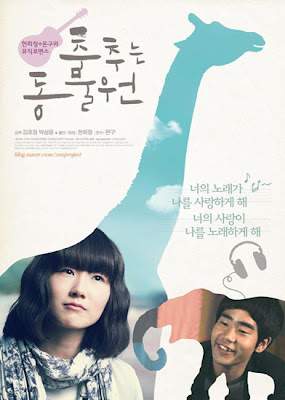 Dancing Zoo was to be the final film in this year's Korean Cultural Service screenings, but Grady Hendrix surprised everyone by announcing that there will be one more on December 20th. The film id a surprise for now. Its a big name film from sometime between now and 1999 that isn't on home video, or rather has gone out of print. (Your guess is as good as mine as to what it might be).

The film was the least attended screening I've been to. I'm guessing the monsoon was the reason fewer people showed up. I was there, so was Mondocurry, sans the lovely Shigeko, who was figuratively under the weather.

Reaction to the film was mixed. Some people I overheard didn't hate it, but they didn't love it either.

I liked it a great deal and found it a nice continuation of some of the romntic comedies that I saw this week from Lincoln Center's Spanish Cinema Now Series (and which I'll be reviewing in two weeks when the series starts).

The story of the film is that a young man decides to leave home for a while. While saying good bye to his animal friends at the local zoo, via songs, he meets a lovely young girl. She's taken aback by his singing and they become friends. She's a successful singer on the club circuit, who is working alone after a break up with a boyfriend. Deciding to stop going solo she is unable to find anyone to play with her, so she calls him. From there the pair fall in love, fight over the music, break up, go their separate ways, try to get back together and then have to deal with his solo career taking off.

A completely atypical film by western standards, this is a great look at a relationship where the two people in it can only communicate through music or through silence. Words for these two, get in the way. This lack of communication, except through some wonderful songs, may make you crazy. The film feels like there are gaps and that it's disjointed, except that not only are the songs being performed, they are expressing each characters feelings. The music fills the gaps. Its a tricky thing to have done because I'm not sure that some people in the audience, used to typical Hollywood musicals, or even something like Once, got what was going on.

On many levels other than the meet cute and initial round of lovey dovey romance, I don't think the film is at all like any romance you'll ever see out of Hollywood - People say and do things to hurt people, things are not said, we jump through time, and most of all there is a real rawness to the emotion that transcends the Hollywood mainstream stereotype. There is a sequence where the couple is driving into the country in his managers car and they fight because she thinks he's been unfaithful. How the scene plays out is not your typical histrionic scene, rather its a scene where emotions bleed out and exhaust the people involved. The argument is not completely rational it emotional. The result is that you feel as though you're listening in on a private conversation.

I really like this film a great deal. I like that it forces you to work with it. I love that the film feels like its bits of these characters lives on screen and not a film. There is an emotional truth to the characters I can relate to. I see the behaviors in several people I know, including myself.

And then there is the music. Wonderful ballads with words that fill in the gaps and speak to your heart. Even if the rest of the film was terrible, I still would have liked this film for the music and how the images are cut to it. I am going to have to go into some of the Korean shops in New York City and see if I can run it down.

This is a flawed but amazing little film.

If you want to know why the Korean Cultural Service's film series is so spectacular, it's that it brings great little films, like this one, to the attention of an American audience. I was talking to the woman who programs the series tonight before the screening and I was trying to explain how great the film series is and how wonderful it is to have a film series that brings great films to light, more so in that many of the films simply are not available anywhere on home video and would never be seen by anyone without it. As I said to her, the films are so good that they give me pause when they conflict with other film series simply because I know if nothing else a screening at the Korean Cultural Service will be interesting enough to warrant the time and effort it takes for me to train into Manhattan. I may have a screening at say the New York Film Festival, but I can't be sure it's going to be worth my time. Any trip to the Tribeca Cinemas for one of the films is, even if I don't like it, I still get something out of it that makes it worth the trip.

Thank god for the Korean Cultural Service and their bi-weekly screenings.

Now that I'm done digressing I'll say if you get the chance do see Dancing Zoo. And in order to give you a taste I give you a music video from the film...well it's got clips from the film but I don't think it's in the film (though it may be the end credits music)

And remember there is one more screening on December 20th before the series picks up in January.
Posted by Steve Kopian at November 22, 2011