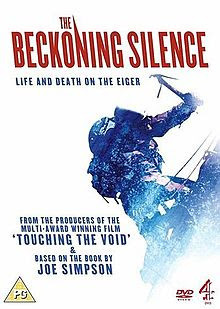 A follow up of sorts to Touching the Void. Joe Simpson, the author of the book Touching the Void and one of it's subjects tells the story of Toni Kurz who was the leader of the second expedition to try and climb the North face of the Eiger in the Alps.

The story told in The Beckoning Silence is a tragic one. It’s the story of how one misstep, one mistake took the lives of a team of climbers. It’s a story that resonated with Simpson and got him interested in climbing when he read it when he was fourteen. It rsonated even more more as an adult since it mirrored, in part, what happened to him in Chile when he was cut free by his climbing partner (see Touching the Void which was reviewed earlier today). The story here is all the more dramatic since all of the events were witnessed by tourists in the lodge below the mountain who watched as the events spiraled downward.

Not to give anything away, what happened on the Eiger those fateful days in 1936 was that a team of four climbers attempted to climb the un-climbable north face of the mountain. Getting a leg up on the climb by using a railway hatchway the quartet made rapid progress until they hit a sheer flat rock wall that had to be traversed in order to climb the rest of the way up the mountain. One of them hit upon the only way across the wall and the quartet was on their way…however the removal of the rope they used to make the crossing sealed their fate. What happens next, as weather, the mountain and injury take their toll, is the rest of the story.

While not as good a documentary as Touching the Void this is still a wonderful little mountaineering tale. The story of the doomed climbers is contrasted by Simpson who speaks of his own love of climbing and how the process of writing Touching the Void changed how he feels about the sport. While the film is a retelling of a the ill fated climb, it’s also a surprisingly good essay on what sort of person it takes to climb a mountain, what is the mind set and as reflected on by Joe Simpson what happens when you suddenly find that the passion and the sense of infallibility is gone. It’s a touching revelation that puts a kick in the tail of the film.

Definitely worth searching out. I don’t know if this is available in the US. I got it as an import from Amazon UK.

(Since I mentioned that the film is not as good as Touching the Void, I should explain why. Made for TV the film suffers with a sense of repetition. The same lines of dialog are repeated numerous times as if they simply sewed the breaks for commercials together. After the third or fourth time it’s like we know that move on)
Posted by Steve Kopian at November 30, 2011