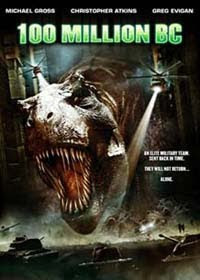 Our week of films to avoid continues with 100 Million BC

Think the worst SyFy Original and make it 10 times worse. This is everything that is wrong with direct to video and made for TV movies. (Then again this was picked up by Syfy after the fact so apparently they can't even pick good finished films)

The alleged plot has a scientist who worked on the Philadelphia Experiment take a team of soldiers through a time machine to 100 million BC where he hopes to rescue friends and family who slipped through time 60 years before. Lots of badly rendered (they look underdone) monsters attack.

Think really awful special effects.I mean really bad effects that look like they were taken away from the animators before they were done.

This looks more like an amateur production then any sort of paid gig, (which is sad since in the right hands the story might have actually worked). Clearly this was released on video to cash in on 10,000 BC. But did you think about should one really bother to pick up a probable turkey that is made to follow a turkey?

Its films like this that make me sad that Mystery Science Theater 3000 isn't still on the air because it's ripe for being picked on.
Posted by Steve Kopian at November 22, 2011

Email ThisBlogThis!Share to TwitterShare to FacebookShare to Pinterest
Labels: ambivalent post, american, not worth the effort, science fiction