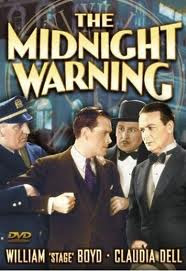 Detective Cornish goes to visit his friend Dr Walcott at a swanky hotel. Walcott has found something that Cornish would find interesting, a human ear bone in his fireplace. As Walcott is standing the window he suddenly collapses. Cornish calls for a doctor who arrives and tells Cornish that his friend collapsed from the heat, and that the blood on his forehead was from the fall. Something doesn't seem right and when the pair tries to investigate someone again takes a shot at the good doctor. With that the detective and the doctor are plunged head long into a mystery that the owners don't want them to know anything about.

From the opening minutes this movie grabs you and pulls you in. Just what in the heck is going on here? You have to know, as mystery is added to mystery and layer is piled on layer you really do want to get to the bottom of things. Certainly things take a strange turn or two, but in this case make it even more intriguing. This is a great little thriller.

The question I want to know is why this film isn't better known since its a dynamite way to spend an hour. William "Stage" Boyd makes a great detective and Hooper Atchley as Dr Walcott is simply a great deal of fun. Not only is the mystery really mysterious, you have some truly frightening scenes toward the end as the dead seem not to be so dead after all.These are the sort of thing you'd expect in a horror film not a mystery film, certainly not one that isn't an old dark house. (You may want to keep the lights on during the second half of the film)

See this movie. This is a keeper, and while you may not watch it a lot, it will be one that you hand off to friends that you'd like to turn on to a really good movie. See this movie you will enjoy it.
Posted by Steve Kopian at November 15, 2011