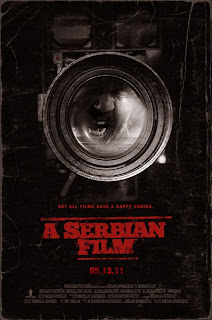 I had heard a great deal about this film and it's censorship issues and put it on my list of films to see when I ran across it.

Some times I should just let it all alone...

This is a warning- supposedly it's an allegory about the situation in Serbia and elsewhere in the world as to how we have to sell ourselves to get by; and how we are raped from birth to death - it's really 105 minutes of depravity.

I'm not sure if I should mention the film here at Unseen since it's not very good. If the film didn't provoke a reaction the film would never ever have been picked up by any remotely mainstream company. Frankly, the depravity is all it has going for it. However this film has gotten a US distributor and will be out and about on DVD so I'm going to throw my two cents in and just warn you that this is a tough and brutal film.

This is a graphically violent, sexually perverse film that leaves no perversion undocumented or implied (what ever you're thinking, it's in here). While the film isn't sexually graphic (as in penetration) it goes to places and infers things that most us would rather not think about. If you don't want to be upset don't watch this film. No one and nothing is unviolated.

I have any number of problems with the film on a purely a cinematic level. First the film kind meanders around for much of it not going anywhere as Milos, our hero, tries to decide what he is going to do. Then once he takes the job the film just get weird for weirds sake as we get these arty set ups that are more ludicrous than anything. By the time the film hits the one hour mark and Milos becomes drugged, things just are nonsensical. Its a series of sequences and flash backs of all the terrible things that have happened. It messes with our heads for no really good reason, other than just to up the list of things going on.

Worse we get characters, such as Milos' brother, who make no sense. One minute they do one thing and the next we get something else. I'm not going to go into the details since I'm trying to keep this relatively family friendly. Basically the characters do what ever the director wants and not anything that makes logical sense. Even Milos, who, along with his family, are suppose to be a nice normal family doesn't always seem to be a nice guy (drugging aside).

My biggest beef with the film is that the director is insisting that the film has a right to show the twisted sex and violence because the film has a point of view. Watching the film I couldn't think of one reason for this film to exist except to act as a calling card for the filmmakers. To me it's simply a film that uses what many people would consider offensive subjects to get noticed. They then put it in the wrappings of a film about how we are all abused so that it could take the high ground.

I watched the film and then the introduction and the Q&A that's on the DVD I have, and to me it just doesn't stand up. The deep meaning isn't there. I would believe it about as much as I would believe that something like the Big Bird Cage was a heart felt plea about women's rights.

Ultimately it's a not very good film that has delusions of grandeur.

(If you want to know why I would even remotely confuse today's and yesterday's film look at the posters and you'll see why.)
Posted by Steve Kopian at November 20, 2011