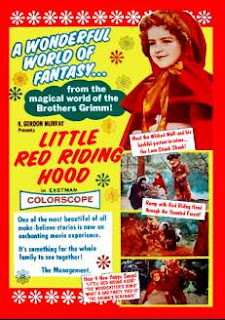 Today and the next two days we'll be looking at three films about Little Red Riding Hood not to mention the Big Bad Wolf and his friend the Skunk. The films were made in Mexico and unleashed on an unsuspecting America by K Gordon Murray. These are the sort of films that if you saw them as a child you were forever scarred by the strangeness contained their in.

The nominal star of the film is supposed to be Red Riding Hood but make no mistake the ones you’ll remember are the skunk and the wolf. They were so popular that they spawned sequels and spin offs(the films of the next couple of days).

The wolf is a tall guy in a brown suit with a big mask that covers half his face. The skunk is a little person in a suit that looks like deranged persons idea of a skunk. As dubbed in here the skunk’s voice is a high pitched chatter that is best compared to the Chipmunks on speed.

The plot of this first film follows what happens when the wolf and his messenger the skunk take up residence in a wolf like cave. The villagers see it as a great evil that can be only removed by an innocent unafraid to walk into the devils lair unafraid. Can you guess who that might be?

Red is a sweet girl who is a tad clueless. She wanders about oblivious to danger and is convinced a rock is the fairy of the morning mist.

The Wolf becomes obsessed with eating the young girl and begins forming plans in order to do so.

Along the way there are various odd side trips including a village festival that has a polka contest that make the wolf and skunk jealous because everyone knows they are the best dancers. Things get amped up when the only person in the village with any backbone, a kid named Freckles,wanders off to find and kill the Wolf on his own. This sets in motion the second half of the film.

The film is a trip.

The dubbing is all over the place. Things get particularly surreal during the songs, especially in the early woodcutters song, where the dubbing is so off as to be laughable. It’s clear that no one is singing what we are hearing.(actually all of the music is mismatched with Red often singing with a closed mouth) I won’t get into the dubbing for the wolf and skunk.

In a weird way I can’t believe that I actually used to look forward to seeing these films when they ran on TV. Some of the local stations would run them during various school breaks and my brothers and myself would crowd around the TV and watch the films with a weird glee. I suspect because they were so different than everything else that you kind of had to watch. Yes there is a road accident quality to it, but at the same time this and the films that followed are so unique that unless you really hate the off beat you can’t help but like the film.

Notice I said like, I didn’t say love. I can’t imagine watching these films repeatedly over a short period of time. I don’t know if the mind could stand it.

The film has a sensibility that is alien to most people in America. Even allowing for the dubbing, the film doesn’t feel like anything that would have been made in the US. The village festival that fills about 20 minutes of screen time isn’t something that would have been portrayed as it is here. Things would have taken 20 minutes to play out and what we see would have been different. Later in the film I don’t think we would have gotten a shot of bones and discussion of dead children, er Freckles, not would we have had the Wolf talk about ripping Red apart so gleefully or even as “graphically” as it’s done here.(The graphic nature is only when compared to the way an American film would have done it).

Thinking about the film as I’m writing up I have to begrudgingly admit that this film is a classic of a sort. I admit I would be hard pressed to argue that the film is great or even a good film, but it is an entertainment that once seen is never forgotten. There are images and sequences that hang with you for decades. I hadn’t seen this film for several decades when I was re-watching the film for this piece and I found that I actually remembered bits of it. It’s a scary thought I know but chunks of this film are burned into my brain.

If you’ve never seen the any of the films with the Wolf and the skunk you should. They are truly unique cinematic creations and worth the effort to track down.
Posted by Steve Kopian at November 01, 2011