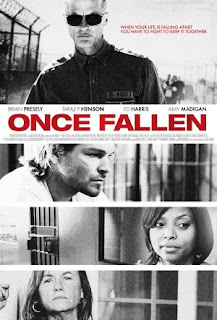 Lets cut to the chase the reason you want to see this is for the performances. The plot having to do with an ex-con who's trying to find a new life but gets stuck with in the criminal spiral thanks to an idiot friend, is merely serviable.(You'll realize that when I say I forgot to tell you that his dad is the head of the Ayran Brotherhood in prison and he's in love with a black girl)

The vetern cast is what shines here. Amy Madigan, Ed Harris, Peter Weller, Sharon Gless, Alison Eastwood and Steve Railsback all turn in performances that are light years beyond the the typical stuff they do in big Hollywood films and on TV. I have no idea why, but this time out of the box they all show some real acting ability. Not that they didn't have it before, but here they all get to disappear into their roles in such away that the typical say Ed Harris character or Peter Weller character is nowhere to be found.

I think the reason the cast is so good is the script, at least as far as the characters and the dialog, is excellent. We have real people and great exchanges. Its the sort of thing where you wish that you could have said some of the things aid and hung out with some of the characters.

The trouble as I said at the start is the story is very much been there and done that. It's the sort of thing you probably have seen before. Frankly several days after seeing the film I can't tell you much of anything about thedetails of the plot. On the other hand I can wax poetic about things like Peter Weller riffing and jiving and explaining why losing a fight was bad and how not having money was going to trickle down as problems to out hero and his friend.

If you like great character performances see this film.
Posted by Steve Kopian at November 09, 2011