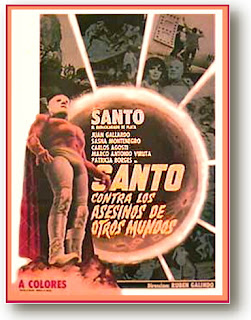 Happy Thanksgiving- todays Turkey is really really bad, and I say that as a bad film fan.

Santo Vs The Blob...

... well...Santo vs a lot of guys under a large rubber sheet.

This is a painfully awful, laughably bad Santo film. It's probably the worst of the lot. Sure some of them are duller (say either Border of Terror or Jinetes del Terror which proves that Santo doesn't work in a western setting) but for unabashed badness this is the worst I've seen.

The plot has something to do with a madman unleashing a space microbe on humanity. The microbe starts off foamy and then turns in to a lumpy brown blob, aka men under a sheet.

After an initial round of attacks Santo is called in and after some discussion is sent to some remote location where he fights gladiator style against several opponents. After beating them he has the blob set on him and he runs around a house chased by said blob, before before escaping out a hidden side door. The blob chases him to an air field where Santo manages to take off before the blob attacks the plane.

That's the first half hour and it's stupid and ludicrous and beyond belief.

The film then stops dead for some sort of a conventional plot before the blob is back in action for the final third.

You'll laugh, you'll cry you'll want to throw the DVD across the room.

What were they thinking?

Okay I've seen a bunch of the Santo movies as well as many others featuring masked wrestlers but few have been as down right bad as this.

Much of the problem is that the blob thing is so awful you can't believe that they actually thought they would get away with showing it. I'm a fan of bad monsters but come on at least there is an attempt on some level to make it look like something other than a tarp with people under it.

Part of the problem, as with many of the later Santo films, is that the plot stops for long periods for wrestling action. Sure it allows you to have a thirty minute movie and stretch it to around 80 but it ends up boring the audience because rarely is it any good (I'm talking where it's just used as filler)

While I will keep the DVD to show my friends the bad monster, I won't be showing the whole film to them since outside of a couple of sequences this film isn't even good MST3K material.

Email ThisBlogThis!Share to TwitterShare to FacebookShare to Pinterest
Labels: horror, mexico, not worth the effort, wtf