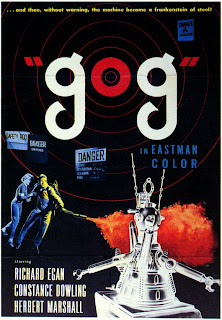 With a scientist that looks like a young Dr Clayton Forester from Mystery Science Theater 3000 this is the sort of science fiction film that they don't make any more. That's a good thing and a bad thing.

Shot in 3D this is the story of a secret government installation buried deep underground that is where they are working on a space station that will carry a deadly light intensifying mirror which will make nuclear weapons obsolete. (Its arranged like the installation in the Andromeda Strain). As the film opens a scientific security agent has been dispatched to do some quiet investigating. Things however instantly get dicey as accidents are revealed to be murder. A high flying jet is believed to be sending radio messages which are controlling the various robotic workers on killing sprees. (The title comes from two of the robots - Gog and Magog)

More mystery than action film with some nice use of depth (if you happen to be seeing this in 3D) this film is alternately exciting and howlingly funny.

The funny parts include the wacky multi-armed robots of the title, the wonderful cold war attitude about an un named enemy seeking to do harm to our efforts to prevent war; and the screamingly naive attitude toward radiation (come on a room is loaded with contamination and it's made safe by a guy walking in wearing a shower curtain).

The good part is that taken on it's own terms this is a good little thriller. Sure the ending is a tad bumpy (the bad guys remain off screen), but it's not entirely happy- there is a tinge of cynicism. In a weird way the film is refreshingly adult with actual scientific ideas (even if out dated and wrong) used as plot points. The film also is weirdly psychic with it's notions of solar power, space stations, robotics and remote control more on target than many similar films made at the time. Credit producer and writer Ivan Tors who made similarly strongly scientific Magnetic Monsters and was responsible for the very cerebral Science Fiction Theater TV series.

Hell no. But it is enjoyable

Definitely worth checking out out if you run across it, more so if you are lucky enough to see it one of the rare 3D screenings.(I say this because its strangely free of things flying at you. Its the sort of film that had you not know it was shot in 3D you may not have noticed it)
Posted by Steve Kopian at November 12, 2011