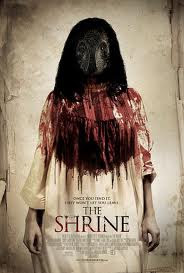 Okay, lets get a few things out of the way, the Polish setting seems to have been picked at random and was done so without researching, ie. it takes place in a town with a name that couldn't be in in Poland since the name isn't Polish in pronunciation or spelling. Also if you know Polish the Polish dialog is a mixture of poor to awful (or so I've read).

That said this is a damn creepy film.

The story follows a group of journalists to a small town in Poland which they have linked to a series of disappearances, particularly to the disappearance of a friend. Once there they find not only are they not welcome, but there is some really weird stuff going on, like a tower of non-moving smoke or fog in the forest(with something at its center).

Nominally the sort of thing that you've seen a couple of hundred times before, the film some how manages to take the set up cliches and turn them on their head. Actually what it does is it takes the cliches and uses them against us, stretching out sequences in ways that we expect and then suddenly don't, or turning things side ways(What happens in the fog still makes you jump even though you suspect whats coming). I also give the film points for not taking the easy way out at the end with a gotcha ending.

Watching the film on IFC In Theaters On Demand I found that I wanted to hit the fast forward to get past the creepy parts, I didn't of course, I hung out to the bitter end. I did hit the rewind because I wanted to see somethings a second and third time.

This film creeped me out, there is something about the tone and the mood that just is bothersome.

While I certainly wouldn't call this one of the great horror films of all time, I will say that it's yet another in a growing line of horror films that I saw in 2011 that have bucked the trend and refused to do things by the numbers or simply be a remake of an old title. The result of this seems to be proof that we maybe in a mini-golden age of horror.

Search this one out on NetFlix or IFC on Demand.
Posted by Steve Kopian at November 18, 2011