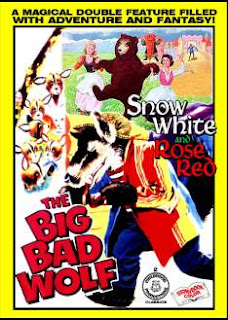 Big Bad Wolf is one of the Childhood production films imported from Europe. It’s not connected to the Red Riding hood movies that we’ve been reviewing the last few days and which I’ll finish up tomorrow.

Running a scant 52 minutes the film is its own little drug trip thanks to the cast of characters being made up entirely of people in animal masks and people clothes. The film was produced in Germany in 1957 but wasn’t released in the US until 1966 when the title was changed from The Wolf and the Seven Little Goats to just The Big Bad Wolf.

This film is strictly for undemanding children, or very young ones who haven't seen a great many movies or cartoons (it often resembles a poor man's live action Roadrunner/ Coyote film)

Beginning with a song called "Don't Be Afraid of Anything" sung by the young goats, the film quickly moves on to the kids going to school where they learn their lessons which involve where to get the best grass, math and who the wolf is.

Later while they are home their mother goes out telling them to lock the door behind her. The wolf then uses this time to try and break into the house however the kids beat him back. He tries to change his voice but that goes astray. Climbing the on the roof he tries to go down the chimney but ends up in a runaway wagon... It goes on like this for 52 minutes, including the final sequence where the wolf breaks into the house and eats six of the goats.

Not bad, but outside of the final ghoulish sequence that is straight out of Grimm's Fairy Tales there is nothing to see here. I'm sure if I I had paid a buck for this I might have been more accepting, but I don't think so.

As I said earlier this is for little little kids with a Charles Addams sense of humor.
Posted by Steve Kopian at November 02, 2011