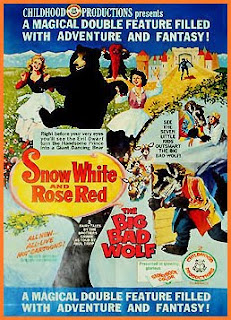 Yet another of the Childhood Production Films that were narrated by Paul Tripp.

You would think that the film was about Rose Red and Snow White but it's more about a weird dwarf.

The dwarf breaks into a castle and steals some jewels. He is chased by a man with a lampshade on his head and two princes (Charming and Goodheart). Goodheart is turned into a bear by the dwarf (we're now about a third of the way into the film and still no ladies) and Charming is still in pursuit of both the dwarf and his missing friend.

The bear ends up with the girls and he helps them with their chores and other things.

Eventually the bear meets the dwarf once more and he chases him to the edge of a cliff where the dwarf falls (graphically) to his death breaking the spell.

The princes and the girls live happily ever after.

I cut out a great deal of inaction and dullness and got you through this less than an hour long film is a matter of moments. Frankly this is one of the least of all of the Childhood production films since so little happens. Basically we're waiting for a certain amount of time to pass.

It's dull and boring and should be avoided.
Posted by Steve Kopian at November 04, 2011