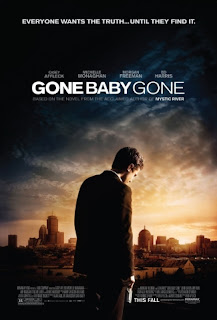 Ben Affleck hits a long fly ball that is either a home run or an in the park triple depending on how you want to score it. The way you score the film will be how you react to the ending of the film which you either throw your hands up at and go with or storm off figuring that they ruined a perfectly good story.

The plot of the film has Casey Affleck playing a detective hired to find out what happened to a missing little girl. The police are having no luck and seem to have been given up on the case. He is hired because he is not police and because he knows the neighborhood and not because he has experience in this sort of thing.As the investigation proceeds he and his partner begin turning up numerous dark leads and when they stumbles on the solution they are faced with a serious dilemma no one could have anticipated.

Amazing well done crime thriller will have you on the edge of your seat for all of it's running time. Its a masterful film that makes you wonder about Ben Affleck and why he hasn't been directing more films. This was Affleck's first feature film but it looks like he's been doing it for years. Think of the best Arthur Penn films or maybe some of Sydney Lumet or some of the other great directors who do gritty street stuff well and add Affleck to the list. He does a kick ass job here and it's truly amazing to see.

The only problem for me, as well as several other people I know, is that the end of the film, comes from an artificial ending factory somewhere in left field. To say I didn't see it coming is an understatement. I can't blame Affleck, rather I blame source novel author Dennis Lehane, who, at least as far as I'm concerned, tends to have endings that never seem natural to the story (I won't get into Mystic River nor Shutter Island). For me the ending, or rather the solution to whats going on, just doesn't work.

On the other hand the rest of the film does, even the actual bittersweet ending of the film is on target, even if how we get there isn't.

While this was a critical hit I don't think this has ever been a popular one, even after Affleck hit gold again with The Town. If you want to see a great little film, one that will truly impress you give Gone Baby Gone a shot.
Posted by Steve Kopian at November 08, 2011