Tom Thumb and Little Red Riding Hood (and the Monsters) (1962) 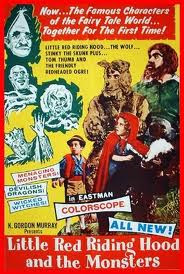 The on screen title says nothing about Monsters, but the film is full of them.

This is the final film in the trilogy of Red Riding Hood films that were were dubbed into English by K Gordon Murray, at least as far as we're concerned this week. I say this because some of the characters such as the Wolf and Stinkie the skunk appear in other films.

The film begins with a narrator talking about the world and how in the Devil's Dominion those practicing goodness are put on trial. From there we get a trial as the Wolf and The Ogre are put on trial for being good to Red Riding and Tom Thumb. The pair are found guilty and are sentenced to death. Tom, Red and the village they live in are sentenced to nastiness as well. Stinkie the Skunk sees this runs off to warn Red and the village.

However he's too late and everyone in the village, except Red and Tom are turned into either monkeys or mice. Stinkie then takes Tom and Red to find the Fairie of the Dawn to see if she can help. She can't directly but she makes Tom human sized and tells them what they must do when they get to the Witch's castle.

From there things get really weird...

Probably the best of all of the films that I'm reviewing this week, it's just a whole lot of really weird fun. On some level I think all of the Red Riding films were building up to this and I'm not sure any of the related titles ever achieved this level of wacky fun.

One of the biggest reasons the film works is that it's one story. Yes, you have the Wolf and Ogre trying to escape, but at the same time it's all about the clash between the Evil Queen/Witch and Red and her friends. You don't have Red wandering off doing her thing and the Wolf doing something else. The fact that the stories of the previous two films were actually split in two weakened them considerably.

This film also works because it has a huge cast at five good guy leads plus ten or eleven monsters and it manages to balance them all out so that no one gets lost.

Speaking of monsters, what a great bunch of silly characters they are. Talk about copyright violations in the making... we have the Evil Queen (From Disney's Snow White), The Vampire (The Nostradamus films), The Frankenstein Monster, a Witch, Siamese Twins, Father of the Hurricane, The Devil, A Kidnapper, Carrothead (a pinhead), a robot, and a fire breathing dragon (you won't believe how he is beaten). I may have missed one or two others. Its a smorgasbord of weird, occasionally bad costumes and a real blast in so bad it's good sort of way.

Lastly the film works because you have a real sense of danger and that anything can happen. Things are no happening by rote. You have a sense that something special, or really weird, is just around the corner.

Watching this again for this for this series I found I was having a blast. To be perfectly honest where some of the other films this week were a chore to get through, this one was an absolute joy. I had so much fun watching it that I seriously considered starting it all over again once I got to the end.

Of any film this week this is the one must see...then again you may want to watch the first two films in the series just so you have a sense of who the characters are.

See it and become a kid again.
Posted by Steve Kopian at November 03, 2011