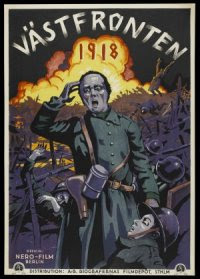 This is one of those movies that you see and wonder why you haven’t heard of it or seen it before. It’s a film that makes you wonder why the film isn’t hailed as a classic. It’s a masterpiece of cinema and one of the most frightening antiwar films you’ll see.

Westfront 1918 was made in Germany at the same time as All Quiet on the Western Front. It’s a different film than All Quiet in that it’s completely concerned with men who are already in the trenches and who are fighting “the good fight”. Using that term is a misnomer since no fight in this film is good and by the end of it everyone will be dead or screaming in pain or insane.

The film follows a group of soldiers from their spending a ruckus night behind the lines, to their redeployment and time in battle until their ends in one form or another.

This is not a happy film since the film shows us that war is hell and then some. It’s a film that doesn’t shy away from showing the horrors of war including the language of war with the use of occasional profanity. The film is also very adult in it’s depiction of sexuality with very strong implications of sex in a couple of scenes.

The film is a dispassionate viewer relating unfolding events with and icy coolness. There is no commentary only the events. As the men go off to battle more times then not the camera simply stays in the trench looking outward as the men run across no man’s land until they are all cut down or retreat. Even in the trenches, which here are seen to be as dangerous as the battlefield itself, the camera sits back and watches as men are quietly swallowed up by the collapsing walls around them. Its an eerie feeling that feels as if the filmmakers are saying you wanted to know what war is like? This is it.

The dispassion is the films one real flaw since the film at times is almost too disconnected so that we never fully feel some of the losses the way we probably should. I wanted to feel some sort of loss with an individual death, but I was never moved fully, I think because the film, like the soldiers in it is forced to move on to the next objective to remain alive.

On the other hand by the time the film reaches its blood soaked screaming conclusion, where insanity reigns and the living can only take comfort sitting hand in hand with the dead, cages have been rattled. As Ende?! Flashed on the screen I sat in my seat staring at the screen wondering what in the hell I had just seen. This wasn’t Kansas and this sure as hell wasn’t Hollywood.

To me the film is probably the most accurate depiction of trench warfare I’ve seen. While I never fought in the trenches, I have studied the First World War and I’ve seen enough film to know that the film knows of what it shows. Its dirty and grimy and damaged and broken and dangerous. There was no hope and no way out. For me the only thing comparable is a documentary. As a fiction film the only film I can compare it to is Raymond Bernard’s White Crosses. While White Crosses may be a bit more polished than West Front 1918, that film depicts the never ending nature of warfare with it’s extended battle scenes that become almost too much to take.

This film is a masterpiece. If the film was ever banned, say by the Nazis, it would be completely understandable since I don’t think anyone who sees this film would ever want to go into battle.

The films running time is listed by IMDB as 97 minutes with the original US release version running 75. Most prints I’ve seen run around 90 minutes. The film doesn’t seem to have a big company US release on DVD, however German War Films has a subtitled copy for sale.
Posted by Steve Kopian at November 11, 2011