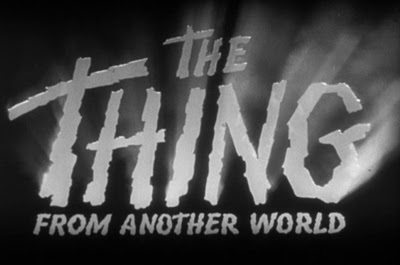 If you ever wanted to know everything there is to know about a movie to the point how you see the film in question is forever changed get a hold of the John Carpenter commentary for the original version of the Thing.

What a director best known for his films of the 1970’s and 80’s is doing commenting on a film from two decades earlier is simply explaining a film he has a mad passion for to a new audience. Of course Carpenter has a connection to the film having directed the remake in 1982 (a film much closer to the original source than the film itself).

The film itself is a genuine classic. It tells the story of a crew from a polar base which stumbles on a crashed space ship and it’s pilot frozen in the ice. When the pilot is brought back to the base, one of the well meaning but completely deluded scientists thaws the alien out he goes on a rampage in the base.

Carpenter’s commentary is a thing of beauty. Taking the film apart scene by scene and moment by moment he lays out not only how the film got made but also all of the tricks used to make a genuinely scary film. To be honest he does such a good job that after I first heard the commentary for the first time it took me five or six viewings of the film to be able to watch the film as a film and not look at all of the little things he points out (The back drop is the same in many outside shots, the camera tilts off the backdrop and you can see the real sky during the explosion to free the alien…)

The best part of the commentary is that Carpenter speaks with such passion that you can’t help but become an even bigger fan of the movie. I always liked the film, but I never was a big fan of the film mostly because it had been borrowed from so many times since it came out that it seemed to lose it’s edge. Carpenter acknowledges that to some degree but he also explains why the film is still a great film that time really hasn’t moved past it.

I love the commentary a great deal. I’ve watched it more than a couple of times with friends and family members who also like the film. Everyone came away greatly impressed and with a renewed love of the film.

The commentary to the best of my knowledge isn’t available in the US. I picked up my copy from the UK in a special edition that had the film and the commentary on one disc, plus a Turner Classic colorized version on the second. (I have no idea why anyone would colorize a moody horror film that relies on shadows and light for its tension since you have to brighten the film to add the color, but that’s just me.). If you can track that edition down, or if you discover the commentary has made its way to the US do, by all means pick it up. It’s a DVD extra that will truly change the way you see a classic film.
Posted by Steve Kopian at December 01, 2011