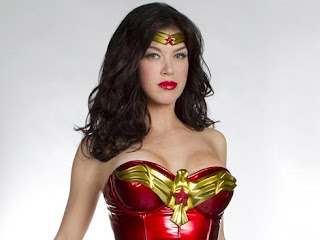 This week at Unseen Films we do are doing a week of films were leaked to the general public. These are odd versions of films that somehow escaped from where they were hidden and ended up in circulation in one way or another. These are versions of well known films that you were never supposed to see- but can if you look hard enough.

First up is the pilot for a Wonder Woman TV series that was aiming for TV screens this past fall.

I saw the pilot at a dealers table at New York Comicon and was kind of surprised that the series wasn’t picked up for the fall 2011 season. No it’s not bad and no it is far from perfect, but there was something there that made me think that perhaps had the concept been tweaked a little bit it might have actually been able to run for a while.

The pilot, written by Allie McBeal creator David E Kelly has Diana Prince running a multinational corporation that promotes her as crime fighter Wonder Woman. Using the money she makes from toys and tie ins to fund her crime fighting she strives to help the downtrodden. In the pilot she battles a rival CEO played by Elizabeth Hurley who is putting new steroids on the street which is causing young athletes to have their hearts explode. It’s the by product of a super soldier formula gone wrong. The clash is what drives what is now a 40 minute stand alone film.

Yes, the clothing is revealing and how it’s portrayed by the Wonder Woman action figures is the source of a funny rant about Diana being more than T&A.

The problem with the pilot is that its got way too much going on to give any sense of where you could or would go with the series.

You have Diana crime fighter, who has some form of super power (she runs and fights like a super soldier) but we don’t know the source.

She wants to keep her home life and work life separate - she’s constantly talking about going home, but as Carey Elwes as her right hand man points out that’s just trying to create an unnatural schizophrenia. However its clear everyone knows who she is so the split is a bit odd.

What is she really doing or trying to do? Yes beyond helping the down trodden but outside of that things are unclear.

Actually much is unclear during the 40 minutes of story we have. It’s clear that Kelly kind of knows what he’s doing, the characters are obviously wandering around with a real sense of the world they are living in, but with out the back story he has the film kind of falls flat at times (I mean why are the cops allowing her to do what she does?)

Is it the classic comic character? Not completely. It’s some intriguing rethink that could have been something had we been given more to go on.

I liked it. I know had it gone to series I would have at least given it a second episode just to see how things played out. Its not the best thing ever but it wasn’t a complete disaster.

It is an interesting Elseworlds take on what might have been…

(For those who like to see things unfinished the version the dealer was screening at New York Comicon had the effects unfinished so you could see all of the wires used to do the super leaps and falls in the fight sequences, which was rather neat if you asked me.)
Posted by Steve Kopian at December 19, 2011