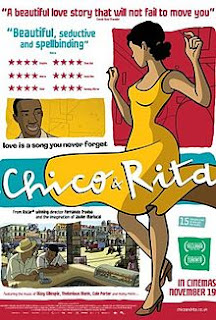 I'm not sure what to say. I wasn't sure I was going to review this film. The film was pointed out to me by Randi (for those who don't know Randi is Unseen's resident finder, librarian and researcher. She's the one we turn to when we have an inkling of something and need more info. She's also constantly finding things we never knew we were looking for.) Randi had heard a review of this film on podcast from the UK and she thought I might be interested. I was and I put it into my Amazon UK wish list because the film seemingly had no US release planned. When a suitable sale happened I picked it up.

Once the film arrived it took me several weeks to actually sit down and watch the film. Now several weeks on I'm kind of at a loss what to make of it.

Chico and Rita is a visual impressive animated film from Fernando Trueba who directed Belle Epoch and Calle 54. He co-directed it with Tono Errando and Javier Mariscal, both of whom are best known for their work in the art and design end of film, which makes perfect sense with this film.

It’s the story of a piano player who falls in love with a singer and begins a torrid affair that takes them from Cuba to Paris, New York and Las Vegas. Actually the film begins now as Chico, now an old man listens to the radio and hears one of the songs he recorded with Rita. The story then flashes back as we see Cuba just after the Second World War. We watch as Chico meets Rita, of how they fall in love, begin a partnership and are tested by time and events that drive them in opposite directions.

The short version is that this is great looking, great sounding film that has style to burn. While the film could have been made live action (the film was made using motion capture by a cast more beautiful than their cartoon counter parts) the animation allows for a striking visual pallet that makes the film, on some levels, something special.

The problem for me is that the film, dramatically, isn’t anything special. For me the story is something I’ve seen way too many times before. And while it has clicked with many people who's opinions I read on line, it didn’t work for me. Honestly some where around the hour mark I began to lose interest. I know part of the problem was that the entire flashback structure undercut the film; simply because the way it’s done at the start implies that there is going to be some pay off at the end. To my jaded eyes what was happening to the characters simply was a long winded time filler until we got to the end.

At this point you’re probably wondering if I’m not a fan of the film why am I mentioning it?

There are a bunch of reasons.

Secondly as much as I am mixed on the story of the film, there are some really good things here. The music is great, there is a cool visual style and some sequences are extremely well done.

Lastly the film is on the short list for the Oscar. While this shouldn’t automatically mean it will get nominated, it does mean that the film will start to show up in theaters near you, especially since the film is being handled by the people behind the New York International Children’s film Festival.

Speaking of which, when you see the film, leave the kids at home, this is an R rated film with adult language, hard R rater sex and violence. Its an odd choice for the G-Kids people to handle, but at the same time they are perfectly situated to get the film noticed and possibly on to the Oscar nomination list.

Worth a look see for adults who want to see an adult romance and don’t care if it’s animated or not.

Out on DVD over seas, coming soon to a theater near you just in time for the Oscars and year end lists.
Posted by Steve Kopian at December 09, 2011