Thief and the Cobbler- The Recobbled Cut 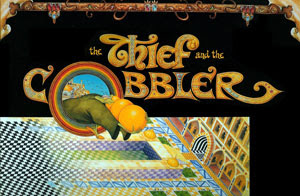 The story of the Thief and the Cobbler is pure Hollywood legend. Begun in 1964 the film went in and out of production for the next 28 years. It was begun by animator Richard Williams who had the film yanked away from him when a completion bond company pulled the film away. It was then finished (in a manner of speaking) by others. It was then cut and recut and released in several editions, none of which really match what was intended. Eventually the film was put back together by fans in a form that kind of approximates what Williams intended...

The plot of the film has the lives of a cobbler, a thief and princess intertwining when the thief’s attempts at stealing from the cobbler results in the cobbler being arrested by Zigzag, the kings lead advisor. The princess takes a shine to the young man and conspires to keep him out of the dungeons. As the story unfolds the advisor attempts to seize control of the kingdom with the help of an evil horde lead by One Eye.

As I said at the start the film was begun by animator Richard Williams in 1964, who wanted to make the greatest animated film ever made. Diving into various myths and legends he began to cobble together (no pun intended) story set in an Arabian setting. He brought in various actors such as Anthony Quayle, Vincent Price and, for one line Sean Connery. Funding was, for a while, entirely independent with Williams struggling to find and keep backers (a member of the Saudi royal family gave money to the production only to be frustrated by missed deadlines and wild cost over runs).

Eventually after winning two Oscars for Roger Rabbit Williams found big studio backing but ran afoul of the completion bond people when the spiraling out of control cost mixed with one too many missed deadline and they pulled the plug…and seized control.

What happened next was that the bond company had someone come in and finish the film. Actually what he did was re-cut, reshoot and re-dub the film… It was released as Arabian Adventure to mixed critical acclaim and zero box office. The film was then re-cut and redubbed again and released as the Princess and the Cobbler to DVD.

None of the released versions of the film (there are at least six) are really what Richard Williams intended (for one thing neither the thief nor the cobbler ever speak in the original and they do in all other versions). All we could do was kind of look at the release versions and wonder at what the film would have been had Williams finished it.

Actually we can do more than that, we can actually see what Williams was up do thanks to a bootleg and unofficial release called the Recobbled Cut.

Using a work print that Williams put together for backers and combining it with footage from the “finished” film (the various versions) we now can see the film in all it’s glory. (The work print apparently has been floating around on VHS since Williams first put it together)

The first thing you’ll notice when you see the Recobbled version is that the film is a mixture of finished footage, pencil tests and storyboards (which Williams only created for the work print to show what had yet to be filmed).

The next thing you’ll notice is that the vocal track is different than any other version. First off neither the Thief nor the Cobbler speak (except for the Cobbler’s final line). Secondly outside of Vincent Price the voices are pretty much all different.

The last thing you’ll notice is the film is infinitely better than it was in any of the previous versions.

Until I saw the Recobbled Cut I never much cared for the film. It was beautiful to look at but it just didn’t really work. Bits seemed to just be there (The dialog for the non-speaking characters for example) while other bits which were the result of the restructuring never seemed to work. Watching the released versions of the film it was easy to believe the stories that Williams had simply been making things up as he went along, that there was no real central plot and that Williams was never going to be finished.

After seeing the Recobbled Cut, my opinion changed. No longer was the film a near total mess on every level but a visual one. Here was a very messy but certainly solid fable…actually I would be hard pressed not to say it’s one of the top five animated films from a visual stand point ever created. The visuals in this version simply are more spectacular then in the release ones.

You’ll notice the qualifier there, and I have my reasons for not making a blanket statement about it’s quality, which is basically, as I said, it’s a very messy film. What do I mean by Messy? Sequences go on to long, there are dead spots, the lack of dialog from the main characters, while better than the nonsense they spoke in other versions, often makes things seem empty. The film could use a very gentle trimming. That said the film is a visual delight and you completely understand what Williams was going for.

Sadly the Recobbled Cut is not readily available. Its something that is floating around in the grey area of the internet and something that can be had at various conventions where DVDs of questionable sources are sold. Its also something that is handed off from collector to collector. Ultimately it’s a copyright violation…

…which may someday, maybe perhaps have something of an official release. What I mean by this is that before he broke with Disney Roy Disney had been shown a version of the Recobbled cut and was so impressed that he had a restoration of the film started at the studio (Disney owned Miramax at the time and they owned rights for release). Unfortunately once Roy broke with the company the restoration was stopped. Perhaps, if we are lucky the studio will start up again and give us a pristine version of the film as Williams intended.

(For a full accounting of the film's history the wikipedia entry can be found here.)
Posted by Steve Kopian at December 22, 2011