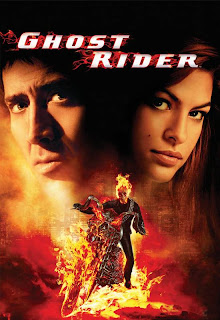 Clunky comic adaptation is some where toward the middle of the pack of big screen comic stories. After the set up of young Johnnie Blaze selling his soul to save his dad, the story jumps ahead to Johnnie as supreme motorcycle daredevil. He reunites with his childhood sweetheart (left because of guilt over what happened to his dad) just as Mephistopheles returns to have Johnnie fulfill his end of the bargain. Blaze must stop Blackheart from getting a contract for 1000 souls which will result in hell on earth. Mephistopheles sweetens the pot by promising Johnnie his freedom if he completes the task. And with that Ghost Rider is reborn.

After a slow set up the movie kicks into high gear with the first appearance of Ghost Rider. Here we have the comic come to life and its fun on a purely comic level. This is not the deep musing of Spiderman, the solid novel like quality of Batman Begins, nor the the misdirected but interesting occult Constantine, this is the sort of thing that regularly graced the 22 pages of the comic book in four colors, its pure mindless cheese that hooks you on the "oh thats so cool" level of the visuals and ideas, even though it makes no logical sense. It hasn't been pumped up for real movie life, rather its the comic come to life, with its lack of complexity intact.

Sue me I liked the film-or at least I did once Ghost Rider shows up. Its just those neat four color panel books I used to read but up there on the big screen.

Classic? I think not.

Mindless popcorn flick? most definitely. If you take it on its terms I think you'll enjoy it, especially once it gets going. Hell, it even has Sam Elliot, what more could you want? Worth a look, especially if you want to be brought up to speed before the belated sequel hits theaters soon.
Posted by Steve Kopian at December 27, 2011