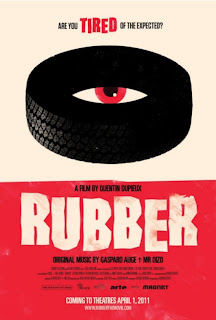 This is one of those times where I’m recommending… no not recommending, mentioning a movie that I really shouldn’t. It’s a really bad miss of a film that is intellectually interesting, but in reality is dull and boring. (I can’t recommend the film as it stands now it’s awful)

Why would I bother mentioning the film?

Partly because some people I know and respect like the film, mostly because I’m hoping someone out there will take their home editing suite and chop this film down to the fifteen minute version that will make it a classic of cinema.

The film is called Rubber and it’s about a tire that suddenly comes to life and rolls around the southwest killing people and animals. It seems the tire, whose name is Robert, can kill people by using it’s mind.

As Robert is going around killing people a group of people stand around watching events through binoculars, and giving an often stupid commentary on the events as they unfold. They also behave like all the annoying people you’ve ever seen in a theater audience and in life and they are roasted over the coals mercilessly. We also get existential commentary from a cop who knows none of this is real and that things happen for no good reason, especially in movies.

The central idea is good. The idea of a killer tire is good. The examination of audiences, of existence and of film is on a basic level quite good.

The problem is that the filmmakers just run it all off the rails.

The first problem is the film is so slow and deadpan that it puts you to sleep. There is no reason for this to be 85 minutes, I mean I was 20 minutes in and little had happened other than Stephen Spinella’s long speech about how there is no reason for things, and the tire coming to life and rolling into the desert. Everything feels stretched to the point of being filler.

Next everything is way too knowing. You can feel the writer and director behind the scenes laughing at the clever things they are doing. You see how they take their clever ideas and push them as far as they’ll go smiling at their own cleverness.

Worst of all they cut their own throats by taking their ideas past the point of stupidity. I have no doubt that they knew what they were doing when they said that there was no reason Adrian Brody’s character was in hiding in the Pianist, and I know they were aware of the wreckage they were causing by deconstructing everything to the point of removing all form to the plot and their ideas, but they did it anyway because it made them laugh. It may have made them laugh, but it made me think that the film had no reason for being since there is nothing behind it other than a gag- and a hope to make some money.

Apparently some people do. It has release deal (I saw it on pay per view) and a few people I know have raved about the knowing quality. My friends insist that the film is actually way more clever than it seems and that the deconstruction and existential nature is even more subversive than I can imagine. I think they are wrong and I suspect that they were not sober when they saw it. I think the best attitude to have is Mondocurry’s who said he couldn’t see rushing out to see it, and that he didn’t know what to make of it. He liked it but didn’t love it.

If you must see this wait for cable or a loaner of the DVD. Personally I’d just take a pass and realize that what ever you would do with the idea of a killer tire is going to be so much more clever than what’s in screen in this nightmare of a pretentious movie.
Posted by Steve Kopian at December 07, 2011