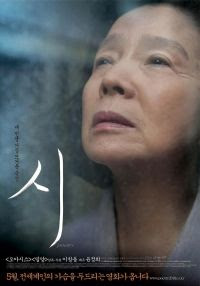 The Korean Cultural Service pulls out a real Christmas gift for those who are jonsing for some good films, one more film in their free film series down at the Tribeca Cinemas.

This time out of the box they are running Lee Chang-dong‘s multiple award winning film Poetry. If you’ve seen any of the directors’s earlier films like Secret Sunshine and Peppermint Candy, you know you’re in for a treat.

The film is the story of a grandmother in her sixties who is taking care of her grandson while her daughter is working in another city. As the story opens she is at a doctor trying to see what is causing some prickly feeling in her arm. She casually mentions that she is having memory problems and this leads to a diagnosis of the onset of Alzheimer’s. Hoping to keep her mind sharp she enrolls in a poetry class which opens up a new way of looking at the world even as the rest of her life begins to take some unhappy turns.

This is a great film that you should see, if you haven’t already (The film played in theaters earlier this year and was a big hit at last years New York Film Festival). It’s a heart breaking film that will alter how you see the world and how you think about how we go through life.

I really owe this film a bigger, longer write up,and it will get one, but the screening is Tuesday and I don't have time to do something appropriate. To be perfectly honest this film kicked me to the curb when I put it on earlier this week to re-view it for this write up and yet again, I find I don’t quite have the words to do the film justice.(The film has been on the Unseen list of films to do since I first saw it)

Do yourself a huge favor, go see this film. Forget the last minute holiday party and instead treat yourself to a great film instead. Seriously short of emergency surgery you have no excuse not to go. I mean, the film is FREE. How often do you get a chance to see a great movie for free?

Okay yes, this is a Korean Cultural Service screening which means that the odds of getting a great film is very high, but even so how often do you get a truly great movie for free?

As always doors are at 630 and the screening is at 7PM. Details can be found here.
Posted by Steve Kopian at December 16, 2011