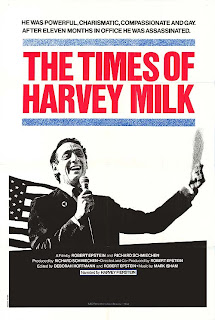 Oscar winning film about slain San Francisco Supervisor Harvey Milk is still a kick in the pants these many years later. Sure for some people Harvey's life is now firmly planted in their minds thanks to the film starring Sean Penn as Milk, but this is the real deal this is what happened in news footage and as told by friends and family not long after the events unfolded.

I wasn't planning on writing this film up. Frankly It's too well known a film and I'm sure that many people have seen it. I mean the film was relatively recently put out in a fancy DVD and Bluray edition by Criterion so I was sure that people were well aware of it...

...and then I stumbled on it on The Movie Channel and I decided to watch a little bit of it to see if it warranted my picking up the Criterion edition... and what do you know...my watch a little became watch to the end. More importantly here was this film that I had seen several times before, granted several years ago, moving me emotionally. I was caught up in the man and the story and the way one man affected so many people around him.

For those who don't know this is the story of Harvey Milk who rose from being a local business man to activist to being the first openly gay city supervisor. The film charts his rise and his clashes with Dan White, who also became a supervisor. White would eventually kill Milk and Mayor Moscone and become the butt of many black jokes thanks to what would be termed the Twinkies defense.

This is a powerful powerful film. I had forgotten how good and how moving the film is. It's one of those great touchstone films that clearly explains how we got to this place and why. Harvey Milk changed the world and even now, almost 30 years since it's release, this film will put it all into perspective.

If you've never sen the film please do so. If you have seen it, but haven't seen it in a while see it again.

Currently out in a Criterion Special Edition.
Posted by Steve Kopian at December 08, 2011