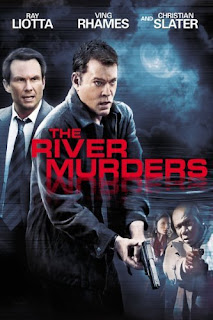 Where did this movie come from? I was sure that this was going to be a time waster, instead I find it to be a wonderful little thriller in the twisted serial killer genre.

The plot has a series of murders happening around happily married cop Ray Liotta. At first it's an unhappy coincidence that he knows one of the victims, but it quickly transpires that he knows all of the victims since they were all past lovers. The who is doing it and why is the film.

Liotta is wonderful as is everyone in the cast including Ving Rhames and Christian Slatter. This group of greatly under appreciated thespians take what is for some of its running time, a cliched film, and keep you watching until the final 20 minutes... its at that point as all of the plot points come to together that the skin begins to crawl on you body as you realize where this might be going...and it's not pleasant.Or to put it another way I did say "Oh that's just wrong", a couple of times

I'm not going to lie and say it's perfect. It's not. Odds are you will get several plot points ahead of the detectives, but at the same time the film builds a nice tension that keeps you watching and makes you uncomfortable in the final half hour. It may not be the be all and end all of murder mysteries but damn does it pack a bit of a kick.

Definitely worth watching, as the emails, phone calls and tweets I sent after finishing it will attest.

This is currently out on home video and worth tracking down.
Posted by Steve Kopian at December 25, 2011