Neutron The Atomic Super Man vs The Death Robots (1962) 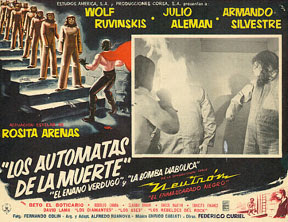 It begins where Neutron and the Black Mask left off...and ignoring bits of continuity in the process.

Picking up not long after the previous film we find that Dr Corante has miraculous survived the neutron bomb. How is explained away simply by saying he escaped. Corante has stolen the bodies of the neutron bomb scientists he killed in the previous film and melded their minds together in a weird box so that he can pump them for information. However since the brains need blood he has sent out his reconstituted zombie army out to drain unsuspecting passersby.

As for the good guys as Dr Thomas tries to unlock the secret of the neutron bomb, the three friends try to put the move on Nora and figure out who Neutron really is.(Yes I know it was revealed at the end of the previous film, but things have changed, I mean Thomas had a pronounced English accent before and now it’s thick Spanish one). As the zombies begin draining the population Neutron and his friends leap in action, at least when they are not trying to pick up Nora.

Wild, over the top and very silly, you either have to throw up your hands and go with it or you’ll go insane.

High art? Are you kidding?

Great fun? In the right frame of mind it is.

Get some friends and some drinks and kick back and have a good time.

(There are three more films in the series, one of which continue the story and two that were a restartor going in another direction.We'll look at the connected film and the first of the other direction films after New Years)
Posted by Steve Kopian at December 18, 2011